You are at:Home»Current in Fishers»Fishers Community»Little Explorers Preschool raises more than $2,500 in penny wars

Students at Little Explorers Preschool have raised more than $2,500 for charity.

Each year, the school takes part in Penny Wars, a fundraiser that encourages students to donate loose change through a friendly competition between classrooms. 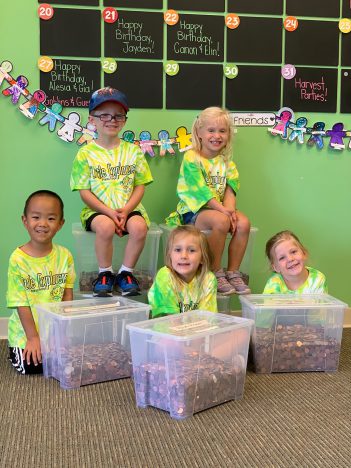 “All of the pennies went to the jars in their classrooms, and any silver coins went to another classroom’s jar,” said Tori Schuh, the activities director at Little Explorers Preschool. “We had a point system where the silver coins were actually negative points. So, if they put a dime in the other classroom’s jar then it was negative toward their overall points. So, the goal was to bring in lots of pennies for your own jars, but bring in silver coins for everybody else’s. That was still a win-win because the charity would still get that money. As we were getting toward the very end, we also (implemented) a dollar bill challenge. Any dollar in your jar was positive points for your class.”

Schuh said one of her favorite things about the fundraiser is how creative the students are in finding ways to raise money. Some ways included students coming in with their own piggy banks, a dad bringing in a water gallon of change, a family posting the event on their Facebook page to get extended family involved.

“We just love shaping kids in this school to be kind, generous and caring kiddos when they walk out of our doors,” Schuh said. “Having that opportunity to further enhance that skill to be kind and thoughtful and compassionate is really awesome. It was much more than just putting the money in; it became a whole lesson on ways they can help.”

Each of the preschool’s seven classrooms chose a specific charity to donate their money to, which included The Animal Protection League of Indiana, Humane Society for Hamilton County, The Ronald McDonald House, Operation Christmas Child, The Peyton Reikhof Foundation for Youth Hope, First Responders Children’s Foundation and The Transverse Myelitis Association.