You are at:Home»Current in Carmel»Carmel Community»Jacobs seeks to close partisan divide in Congressional bid

For Andy Jacobs, politics is in his blood. 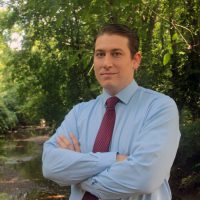 Both his father and grandfather served in Congress, and Jacobs wants to follow in their footsteps. The Indianapolis Democrat recently announced he will run for the U.S. House of Representatives in Indiana’s 5th District, a seat being vacated in 2020 when Republican Susan Brooks retires.

Jacobs, a deputy prosecutor in Marion County, said he’s long considered running for office and that a growing partisan divide led him to do it now.

“I’ve always had patience for hearing people out that I disagree with, and I think that I’d be well-suited to go over there and reach across the aisle and try to form some friendships and get to a place where there is cooperation and bipartisan efforts,” he said.

“He always taught me to look for the good in every person, especially the people that you didn’t expect to find it in,” Jacobs said. “I get a lot of that sense from him.”

Among Jacobs’ key issues is reforming campaign finance laws. He does not plan to accept funds from lobbyists or political action committees during his run for office.

“A lot of people are starting to get a sense of no matter who they vote for, once (elected officials) get in Washington, D.C. and there’s big money interests who are funding their campaigns and holding the ax over them, then they’re not really there to represent the people that elected them,” he said.

He also believes that access to preventative health care should be expanded.

“It is unconscionable in a country as wealthy as ours that we don’t provide health care to people,” he said. “It should be a basic human right to have access to a doctor, not only emergency services but preventative services that keep you healthy day to day.”

Westfield resident Ken Tucker, a stay-at-home dad and former teacher, plans to run as an independent.