Space is a commodity the Zionsville Police Dept. does not have in abundance, according to ZPD Chief Robert Knox. 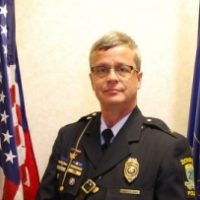 Knox spoke at the Oct. 7 Zionsville Town Council meeting as part of a presentation requesting the council approve nearly $20 million in bonds to finance a new campus complex to house the street and parks departments, which would allow the police department to further expand its current headquarters at 1075 Parkway Dr. The council downvoted the request, 4-3. Knox said he’s unsure of next steps to secure more space.

“Right now, we just don’t know what our plans are. There’s no place to grow,” Knox said. “Here at the police department, we are absolutely running out of room. There are boxes stacked in offices on desks. We are maxed out. Quite honestly, there’s hardly any more imaginable office space. I’ll have to start subdividing rooms to put a small desk in some places as we continue to grow and do what’s expected.”

Among concerns is vehicle storage. ZPD recently acquired a renovated ambulance to serve as a crime scene response vehicle. ZPD’s garage only has two bays. Knox spoke on the importance of maintaining the ambulance so that it lasts for several years.

“It’s in and out (of the garage),” Knox said. “Right now, I want to be very protective of this asset. We also have a new Polaris to patrol parks, and it’s sitting outside right now.”

ZPD has access to several pole barns for  vehicle storage but the buildings don’t have adequate security. Knox is mulling other storage options.

“I’m thinking, ‘Are we going to have to put up temporary trailers or something?’ And then there’s a whole new debate over that,” he said. “Do I need to start thinking about one of those storage pods or mini barns or something? Right now, we are waiting to see if (the council will) circle back around and talk about this some more or come up with another idea.

“Right now, we are going to go ahead and give it 100 percent of our efforts and try not to miss a beat. It’s a challenge here inside of police headquarters as far as where to put things and where to put people.”