You are at:Home»Current in Westfield»Westfield Community»Westfield firefighter ranks fourth in national competition

A Westfield firefighter has gained recognition at the national level after placing high in a strength and agility competition. 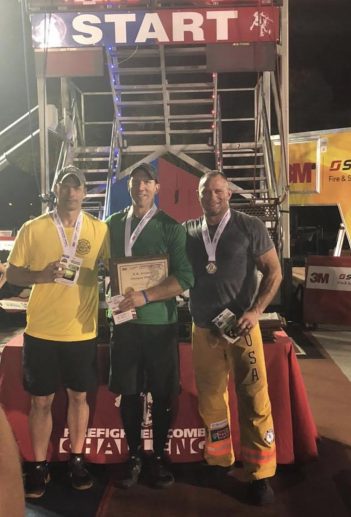 Matt Hansen, a Carmel resident, recently placed first in the “Over 40” division and fourth overall in the nation in the national-level of the Firefighter Combat Challenge with a time of 1:26.

The competition, held this year from Oct. 4-6 in Fort Pierce, Fla., draws hundreds of firefighters from the U.S. and Canada annually and aims to showcase the rigors of firefighting to the general public. Wearing full gear, contestants race head-to-head to complete jobs related to firefighting.

“The competition revolves all around firefighting tasks, so it’s basically like an obstacle course that you have to do while you’re wearing all your gear,” Hansen said. “It’s basically what you would encounter every day on the job, especially on a fire call.”

Hansen got his start as a firefighter with WFD in 2008 and has participated in the Firefighter Combat Challenge since 2012.

“You always compete individually, but times go toward the team time,” Hansen said. “I started competing just to get in shape for the job, and then it kind of morphed into missing a sports atmosphere and missing that kind of competition. So, we found this and have been doing it ever since.”

Hansen has been married to Kira for 16 years and has two kids, Annika, 6, and Maximum, 10.