You are at:Home»Current in Fishers»Fishers Community»HSE’s 2020 proposed budget presented 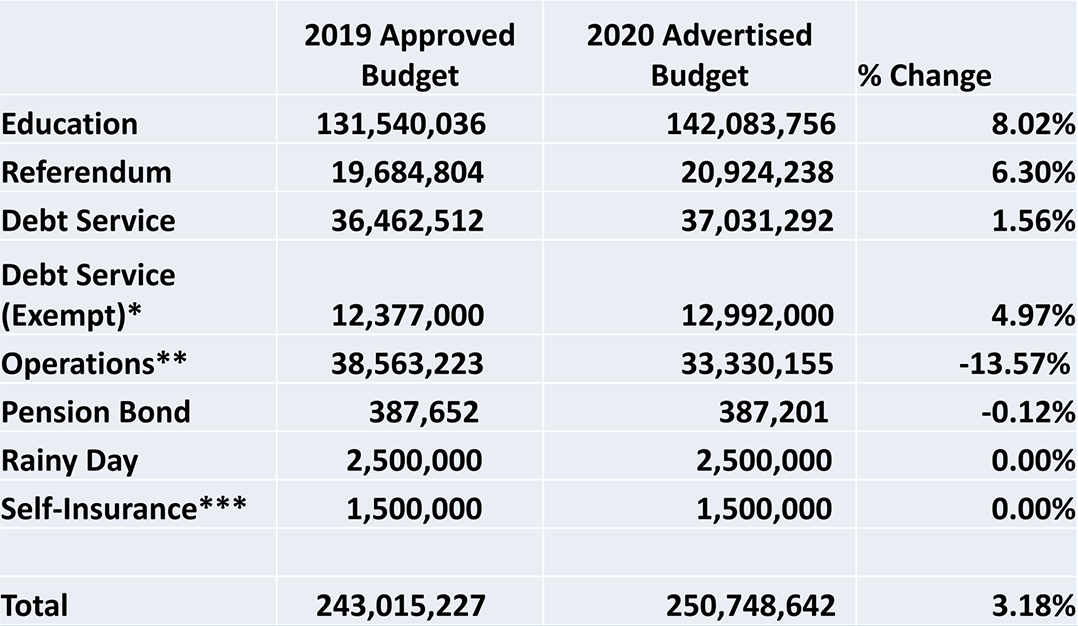 This chart shows the 2019 compared to the proposed 2020 budget. (Submitted chart)

The $250.7 million proposed budget is a more than 3 percent increase to 2019’s budget of approximately $243.1 million, which Nunn said can mostly be contributed to a proposed increase in the district’s education fund.

“Our education fund budget is increasing a little over 8 percent, with the referendum fund (increasing) 6.3 percent, and operations is actually declining 13.57 percent,” Nunn said. “In 2019, when the education and operation funds were created, some of the general fund expenses were shuffled to operations. In 2019, we were, and actually still are, transferring monthly from education to operations to cover those expenses, but by realigning the budget, we won’t need to do that for 2020. We’ll actually be transferring money the other way, from operations to education, about $1.25 million over the course of the year.”

Other increases can be seen in the district’s debt service exempt fund, which will increase 4.97 percent, due to the full payments for Southeastern Elementary coming online.

Like 2019’s budget, another $2.5 million will be put into the rainy day fund and another $1.5 million into the self-insurance fund, which pays for dental benefits for employees.

“We spend most of our time focused on the education fund and referendum. This is the biggest portion of our budget,” Nunn said. “About 65 percent of our budget is between those two funds, and they pay for our teachers, so those are critical for us.”

Nunn also discussed the district’s position compared to cost-of-living factors within its boundaries.

“When we compare our general fund per student increase in expense with cost of living, we have remained a fair amount below that,” she said. “Overall, it shows that we’ve been very careful in our spending over the course of the last years.”

In addition, Nunn said the district was in a good position when comparing assessed valuation of property within district boundaries versus the growth and enrollment.

“Our assessed valuation is growing much more quickly than our student numbers, and that is a really good place for us to be” Nunn said. “During the last recession, those numbers were flipped, and our student enrollment was growing much more quickly than the AV. As the AV grows, that generates more money for our debt service, referendum and our operations funds. With those higher AV growth numbers, that causes our tax rates to decrease. During this time, we’ve built a couple of new buildings, we’ve issued several general obligations and done some major renovations of our buildings, all while maintaining a .5898 (percent) debt service rate, so that’s pretty good.”

The Oct. 9 meeting served as a public hearing for residents to voice concerns with the proposed budgets. No residents spoke during the hearing. The school board will take a vote on the budget at its Oct. 23 meeting.