For Center for the Performing Arts President and CEO Jeffrey McDermott, the timing is right to seek its first corporate naming rights partner.

McDermott said the board has been working diligently on a strategic plan, and part of that is finding the right corporate naming sponsor and the right time to launch the search. 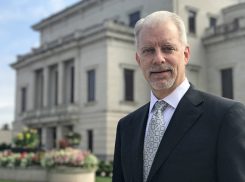 “The opinion of the board, management and the entire staff is the timing is really right now as we are approaching our 10th year anniversary,” he said. “We have had a number of terrific seasons, artistically, educationally and financially. We see ourselves as a rising stock.”

McDermott said the Center is seeking a partner with a shared vision of advancing the arts and educational programming.

“We’re looking for a longer-term partnership,” he said. “We are cognizant of the fact that there are other venues around the country that seem to have a different name every few years. That’s not ideal at all. Our corporate partnerships have been very long term. Our goal is to find the right corporate partner, who is looking to have a very long-term relationship with us.”

The Center, a nonprofit, opened in January 2011 with three theaters, the 1,600-seat Palladium, The Tarkington with 500 seats and the Studio Theater with 200 seats.

“We’ve been in the black for multiple years,” McDermott said. “We are not ruling any industry or market sector. We want to cast a wide net and see where the interest comes from.”

IEG, a leading sponsorship consultancy, conducted an independent analysis of the naming assets to help guide the Center. IEG’s analysis included a review of multiple sectors, brands, opportunities and sponsorship vehicles across the nation.

Larry Weil, nationally recognized sponsorship expert, said the first number that popped into his head for a naming rights deal was $250,000 per year.

“If you could get that for five or 10 years, I think it’d be a win,” he said. “The big things sponsors will look for is how much exposure, one from driving by, number two, who are the people that are going there, and what is the attendance offer the course of the year? People are going to want to look for alignment with their brands. They also want to know how much it’s mentioned in the newspapers and other media. If it’s known as the XYZ Center, where is it going to appear, is it national, regional or local? They want to know much media is being spent to promote the venue.”

For example, Milwaukee Theatre’s naming rights were purchased  by MillerCoors in 2017 for $350,000 per year and renamed Miller High Life Theatre.