You are at:Home»Current in Fishers»Fishers Community»GoFundMe fundraiser to aid in medical expenses for Fishers quadriplegic

Fishers resident Chuck Knox has spent much of his life helping others. He and his wife Shari Knox have devoted their time, financial resources and services to more than 24 different local organizations. And now, they need some assistance of their own.

On June 8, Chuck Knox was walking up a flight of stairs when he missed the top step and fell backward down the stairs. He couldn’t feel or move his arms or legs. Shari Knox immediately called 911. 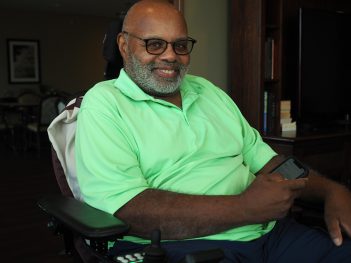 On June 10, Chuck Knox underwent surgery to stabilize his vertebrae. The accident left him paralyzed from the neck down. He is considered a partial quadriplegic and will require 18 to 24 months of intense physical therapy.

Friend and neighbor Ron Diamond stepped in to help. He calculated what Chuck Knox’s total expenses might be when his full rehabilitation benefits run out Oct. 17. He determined the cost could be $300,000.

“These folks have been so involved in their communities and they’ve never asked for anything in return,” Diamond said. “And now, something like this happens. It’s just a devastating accident both financially and emotionally.”

“I thought if there was any time for me to give back to my community, now is one way to do it, and I can’t think of better people to do it for than Chuck and Shari,” Diamond said.

Initially, the Knoxes were hesitant.

“We have always been very independent, proud people,” Chuck Knox said. “We’ve never asked for a lot of help from others.”

When the Knoxes realized the catastrophic bills they could face, they agreed to let Diamond help.

“It was amazing to see the number of people that cared enough to donate,” Chuck Knox said. “We just want to express our heartfelt appreciation.”

To donate, visit gofundme.com/f/gofundme-for-chuck-knox-of-fishers-in. Donations also can be made by check at First Internet Bank, 11201 USA Pkwy., in Fishers.