You are at:Home»Current in Fishers»Fishers Community»Faces of Fishers: Andy Imes 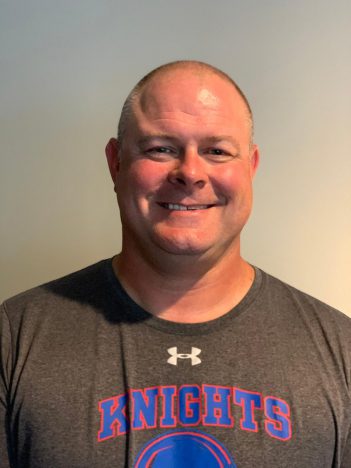 The Fishers HSE Youth Football League Knights are 8-0, and a large part of their success can be credited to Coach Andy Imes. He has always felt that coaching is his true calling in life, and in the past, he also has coached soccer, baseball and basketball.

As far as mentors, Imes said that former Indiana University football coach Bill Mallory had the greatest influence on how he guides his players. After joining the IU football team as a freshman but then getting injured, Imes became a student assistant coach under Mallory while earning his degree in sports management and marketing.

Imes has been married to his wife, Tracy, for 20 years. They have lived in Fishers for 15 years. Their daughter, Jordan, is a junior at Fishers High School. Their eldest son, Carter, is an eighth-grader at Fishers Junior High, and their youngest son, Graham, is in sixth grade at Sand Creek Intermediate. Tracy Imes was on the Butler University women’s swim team, and all three kids are active in team sports.

How he met Tracy: Blind date

Most important coaching principle: You can control two things – attitude and effort

Favorite hashtag: #leo for ‘love each other’

What he would take on a desert island: Dora’s magic backpack

Do you have an interesting friend who lives, works, or worships in Fishers? Send suggestions to sgattlieb.currentinfishers@gmail.com.