You are at:Home»Current in Noblesville»Noblesville Community»City showcasing Charters of Freedom at Federal Hill

A life-size display of replicas of the United States’ Declaration of Independence, Bill of Rights and Constitution are now in place at Federal Hill Commons in downtown Noblesville, making it the third spot in the state to have similar displays.

The permanent installations are a result of a partnership between the City of Noblesville and Foundation Forward, a nonprofit that installs the displays across the nation, founded by Vance and Mary Jo Patterson. In 2011, the couple visited the National Archives in Washington, D.C., and were moved by the experience so much that they started an organization to build permanent displays of replicas. The first was dedicated in 2014 in North Carolina. Including Noblesville’s dedication, there are 23 nationwide. There are two others in Indiana, one in Kokomo and another at Hanover College in Jefferson County. Others are planned in Logansport, Huntington and Lawrence. 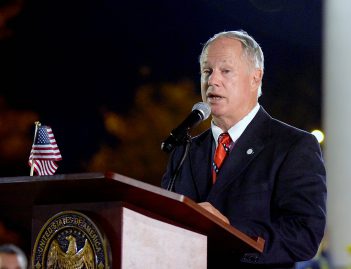 Noblesville’s display was unveiled on the east side of Federal Hill Commons during a Sept. 28 special ceremony. Congresswoman Susan W. Brooks was the keynote speaker.

“The Declaration of Independence, Constitution and the Bill of Rights are at the heart of our democracy and should guide government,” Brooks said. “With this permanent installment of the Charters of Freedom in Noblesville at Federal Hill Commons, we have a constant reminder that we are secured by our freedoms and rights as citizens of the United States of America.

“Congratulations to the citizens and leaders of Noblesville for being chosen as one of only 26 communities in the country to have installments of these founding documents.”

“It was the mayor’s and Vance and Mary Jo Patterson’s passion that led us to celebrating our great country with this constant reminder of our freedoms bestowed upon us by our forefathers,” Parks Director Brandon Bennett said at the ceremony.

In addition, legacy pavers will be for sale to be installed around the display to honor loved ones, active duty military, veterans, first responders, families or organizations. For more, visit chartersoffreedom.com.