You are at:Home»Current in Zionsville»Zionsville Cover Stories»True survivors: Zionsville residents share journey of pancreatic cancer to help others

Larry Nicolet is a numbers guy who has beat the odds.

“When I was first diagnosed with pancreatic cancer, it was 5 percent will make it five years,” the retired insurance sales executive said. “Now, through awareness and more research, we’re up to 9 percent. It’s still the deadliest cancer (in terms of survival rate).”

“When Alex and I were first diagnosed, it was, ‘Get your affairs in order,’” Nicolet said.

Nicolet and Wrona speak with other pancreatic cancer patients to answer questions through the Pancreatic Cancer Action Network. Nicolet participates in the PurpleStride Indianapolis walk to raise awareness.

“When people hear they have pancreatic cancer, they are told you need to call Alex or Larry because they both survived,” Nicolet said. “We’ve become the spokespersons for pancreatic cancer.”

“For us to battle the disease we’ve battled, it’s phenomenal for both of us.” Wrona said. “For anything we can do to help anyone get through this horrible disease, I’ll do whatever I can do, just like Larry will do.”

“It’s a horrible disease. You may make it, you may not,” he said. “But I’m going to advise you on my expertise on the disease to try to help you cope with what you are going through. What we are trying to tell everyone is there is always hope.”

Nicolet said the first year he attended the PurpleStride Indianapolis walk for pancreatic cancer in 2011, there four survivors appeared on stage. At the June 2019 walk, there were 32 survivors.

Nicolet and Wrona get calls from the network from across the Midwest.

Allison Kotur, a volunteer and Indianapolis Affiliate chair for the network, said Nicolet and his wife, Joan, have been instrumental in driving the mission of the Pancreatic Cancer Action Network forward, from fundraising to advocating for more federal funding and by volunteering for nearly nine years.

“The most impressive thing to me is Larry’s willingness to share his story and talk with those newly diagnosed pancreatic cancer patients and offer them hope,” Kotur said. “Larry has spent countless hours talking to people from all around the United States and getting them connected to the Patient Services that the Pancreatic Cancer Action Network offers.

“Larry is a symbol of hope to many that feel hopeless, and we are so thankful for the Nicolets’ continued involvement.” 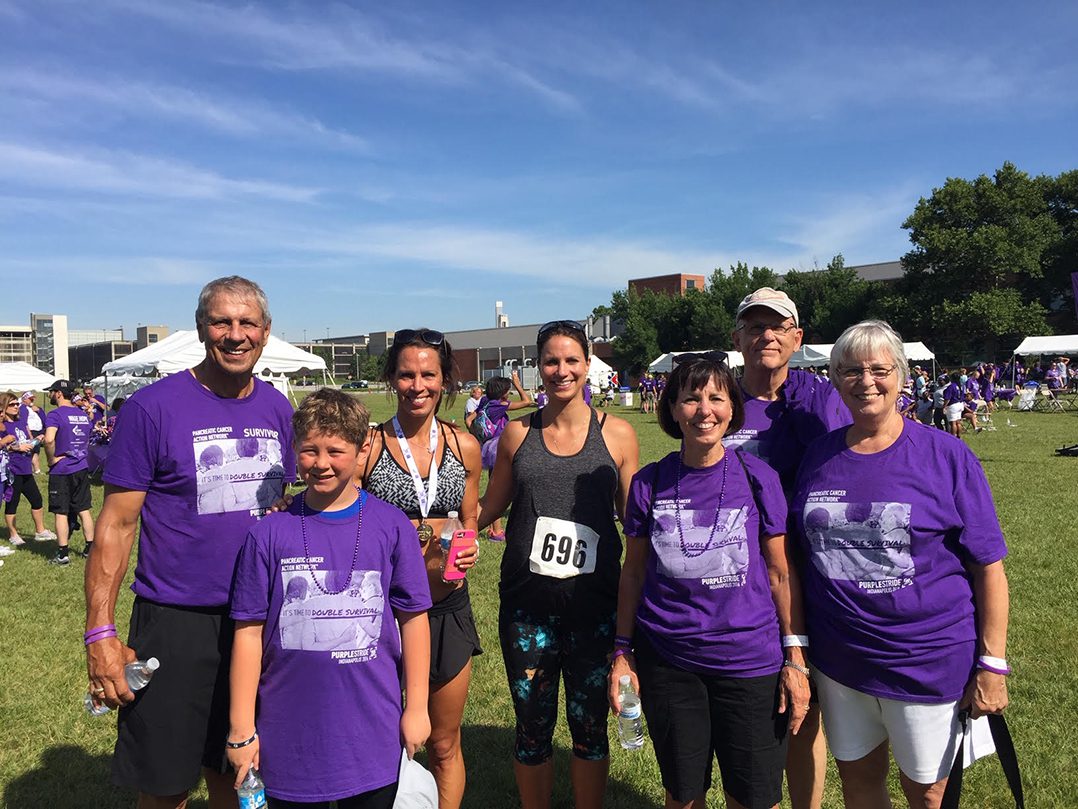 Larry Nicolet and Alex Wrona met through a mutual friend, ex-Zionsville and now Carmel resident Paul Harrington, after they had both battled pancreatic cancer. Wrona and Harrington played football together at Butler University and were in Sigma Chi. Nicolet was a Sigma Chi at Purdue, where he was on the golf team.

Nicolet and Wrona have each lived in Zionsville for more than 30 years.

Their cancer paths at the beginning were similar, too.

“We both had yellow eyeballs,” Nicolet said of the discovery. “You look like a drunken sailor. My wife said I didn’t look right. We were at a Butler (basketball) game and I told her it was lighting at Hinkle.”

Convinced by others he didn’t look well, Nicolet went to the doctor and learned his fate. He then had Whipple surgery, a procedure to remove the head of the pancreas.

Fifteen months later, Nicolet said he learned cancer had returned in the remaining part of pancreas.

“Dr. (Michael) House said, ‘We’re going to make sure you don’t get pancreatic cancer again. We’re going to remove your pancreas,’” Nicolet said. “After that, I had no chemo, no radiation. They just got rid of the pancreas.”

That immediately made Nicolet a Type 1 diabetic, since the pancreas produces the insulin the body needs. He uses an insulin pump in his pocket.

“When people ask me about it, I said this is my outdoor pancreas. It rides around in my left pocket,” he said. “It carries a three-day supply of insulin.”

A year after his pancreas was removed, cancer cells were detected in his scar tissue where the pancreas was.

“I became one of the unique people in the world to have pancreatic cancer three times with the last one not having a pancreas,” Nicolet said. 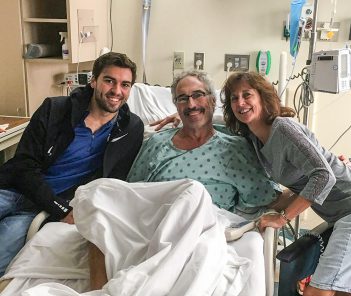 Alex Wrona’s son Eric Wrona, left, and wife Cinda Wrona visit him at St. Vincent Hospital when Wrona got a bone and brain cancer in 2018.

Doctors used a combination of drugs to eliminate cancerous cells without surgery in 2013. He has been cancer-free since.

Wrona also had Whipple surgery. Three years later, he was diagnosed with bone and brain cancer.

“I’m still going through chemo, which may be forever,” said Wrona, who recently switched his chemotherapy from every two to every three weeks.

Wrona was very active before the cancer diagnosis. He played racquetball competitively and worked out regularly.

“This just floored me,” Wrona said.

Wrona was a trade show director for 30 years. He eventually started his own company for trade shows, which he is still involved in to a lesser degree.

“Cinda is my rock because this is an ongoing, every day situation to make sure I’m right (physically),” Wrona said.

Nicolet said said the same is true of wife. The Nicolets have three children, Mindy, 41, Molly, 37, and Mark, 33. All three graduated from ZCHS.

“I use my three Fs: My family, my faith and my friends,” Nicolet said of his support.