The Westfield City Council met Sept. 9 at City Hall. All councilors were present. The next city council meeting is set for 7 p.m. Sept. 23 at City Hall, 130 Penn St. For more, or to see an agenda, visit westfield.in.gov/council.

What happened: The council unanimously voted to approve an ordinance for the Midtown at Westfield planned unit development.

What it means: The Midtown at Westfield development, a proposed 138-acre mixed use project at the intersection of 191st and East streets, came to the council with a unanimous favorable recommendation from the Westfield Advisory Plan Commission.

The project by developer Steve Henke is set to bring hotels, office space, restaurants and retail to the intersection, and the ordinance changes the zoning of the property from agricultural/single-family rural, single-family medium density, enclosed industrial and local business zoning to general business, enclosed industrial and general office zoning. Read more at youarecurrent.com.

What happened: The council voted 4-3 to approve an ordinance for the Orchard View planned unit development.

What it means: The Orchard View development could bring 282 new homes to a 103-acre plot of land north of Ind. 32 and east of Spring Mill Road. According to the developer, Arbor Homes, the project will attract empty nesters to a set of homes to be sold in the low- to mid-$200,000 range. Approximately 26 acres will be dedicated to common areas, ponds and recreation space.

What happened: The council voted 5-2 to approve an additional appropriation to help fund construction of the Westfield Playhouse.

What it means: The appropriation of $300,000 from the city’s general fund was approved 5-2 by the council to fund the new Westfield Playhouse at 202 N. Union St. Councilors Lehman and Spoljaric voiced concerns about the long-term financial plan, leading to their nay votes.

What happened: The council unanimously approved resolutions establishing an economic revitalization area and allowing for a 10-year tax abatement for a property at 16805 Southpark Dr.

What it means: The developer of the property, JJK Investments, LLC, plans to build a 9,600-square-foot building on approximately 1 acre to attract a tenant. Councilors Bob Horkay and Steve Hoover said they regard the development as an “infill” project.

City staff said the developer is estimating that a future tenant will bring approximately six new jobs with an aggregate salary of $180,000 without benefits.

The 10-year real property tax abatement will decline by 10 percent from 100 percent each year.

No residents spoke during the public hearing.

What happened: The Westfield Dept. of Public Works introduced an ordinance to the council to amend traffic regulations through the city.

What it means: DPW officials said the proposed changes are a result of the city taking ownership of new roads because traffic regulations were updated last year.

If approved, changes will include regulation of roads in new subdivisons, the addition of no-parking signs in various neighborhoods, stop-control changes at Ind. 32 and Ditch Road and Gunther Boulevard and Heathcliff Court and speed limit changes in the neighborhoods of Maple Knoll, Maple Village/Sonoma, Viking Meadows and Villages of Oak Manor.

No action was taken, and the council will vote on the ordinance at its Sept. 23 meeting.

What happened: City staff introduced the 2020 City of Westfield operating budget to the council.

What it means: City staff presented highlights from the proposed 2020 budget before a budget workshop set for Sept. 16. Because the presentation was only as an introduction, no action was taken by the council. 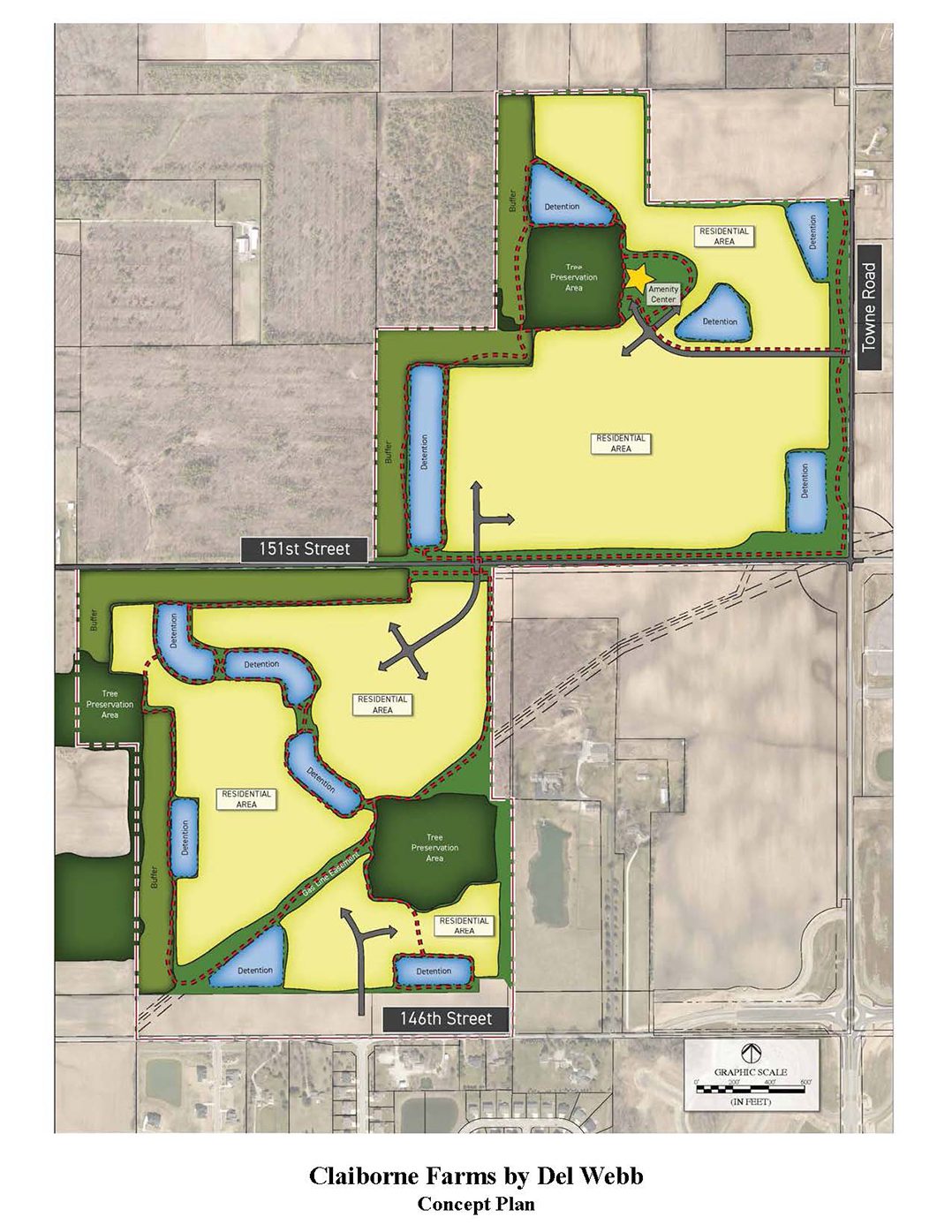 Pulte Homes is working to bring nearly 500 age-restricted homes to Westfield on the north and south sides of 151st Street, east of Towne Road for a development to be called Claiborne Farms by Del Webb. (Submitted rendering)

What happened: The council heard an introduction for a new housing development, Claiborne Farms by Del Webb.

What it means: Developer Pulte Homes is petitioning for a change of zoning for 245 acres to build a new age-restricted community, Claiborne Farms by Del Webb. The project, if approved, could bring 490 single-family homes ranging in price from $260,000 to $400,000 on the north and south sides of 151st Street, east of Towne Road.

Development plans also include a 7,000-square-foot indoor community center that will have bocce ball, pickleball, a fitness center, pool and other amenities. The project also outlines plans for an internal trail network, community gardens, an outdoor kitchen, dog park and more.

Because the presentation was only an introduction, no action was taken by the council.