After transferring from Noblesville High School after his junior year, University High School pitcher Reese Sharp had to sit out 365 days and wasn’t able to pitch until the regional.

He made those final appearances count as the Sharp pitched in the team’s final four games, winning three. 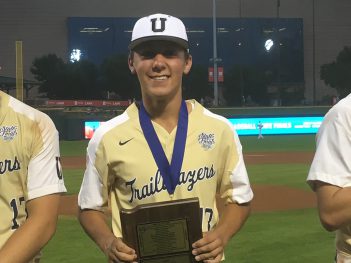 Sharp struck out 17 to lead University High School to 4-1 victory over Washington Township June 17 in the IHSAA Class A state baseball championship at Victory Field.  It was the first state championship in any sport for the Carmel high school.

The 17 strikeouts are the most by one pitcher in any class in the state championship game. Sharp, whose fastball is 90-plus mph, had two more pitches left before he would have to leave the game after reaching the maximum 120 pitches when he recorded the final strikeout to end the game.

“When he’s at his best, he’s almost unhittable,” University right fielder Nate Shatkowski, a Fishers resident, said. “To have a teammate like that with the skill set he does is just crazy.”

Sharp helped his own cause with a run-scoring triple in the first inning. Tyler Galyean added an RBI single and a third run scored on a throwing error.

Trailblazers coach Chris Estep, whose team finished with a 22-10-1 record, said the 3-0 lead was a boost to Sharp.

“It allowed him to take a deep breath and performed the way he needs to, but he still struggled with pitch count in the first few innings,” said Estep, a Carmel resident and founder of Roundtripper Sports Academy in Westfield. “He was so amped up, so giving him a couple runs was awesome. After the (30-minute lightning) delay (in the second inning), he was a little more relaxed.”

Sharp said the wait to play was worth it.

“I’ve worked hard, this whole team works hard, they deserve it,” said Sharp, an Indiana University commit and 28th-round draft pick of the San Francisco Giants. “We have so much team chemistry. All the guys love each other.”

Galyean led the hitting attack with three hits. Dawson Estep, the coach’s son who just graduated, and Matt Moore each had two hits. Galyean and Moore will be juniors in the fall.

“It’s kind of storybook to lose our junior year, work out butts off and come back and win it our senior year,” Shatkowski said. “It’s just a testament to all the hard work we put in and our coaches and everyone who backed us when times were tough at the end of last season.”

Shatkowski was named the Class A Mental Attitude Award following the game. Shatkowski, who founded the DECA and Special Olympics Club at University, is one of 10 high school seniors to receive a full scholarship to Indiana University’s Kelley School of Business.

“I worked hard in the classroom and with extracurriculars, and to cap it off with the Mental Attitude Award, I can’t ask for anything more,” he said.