You are at:Home»Current in Carmel»Carmel Business Local»County ranks 2nd for local investment 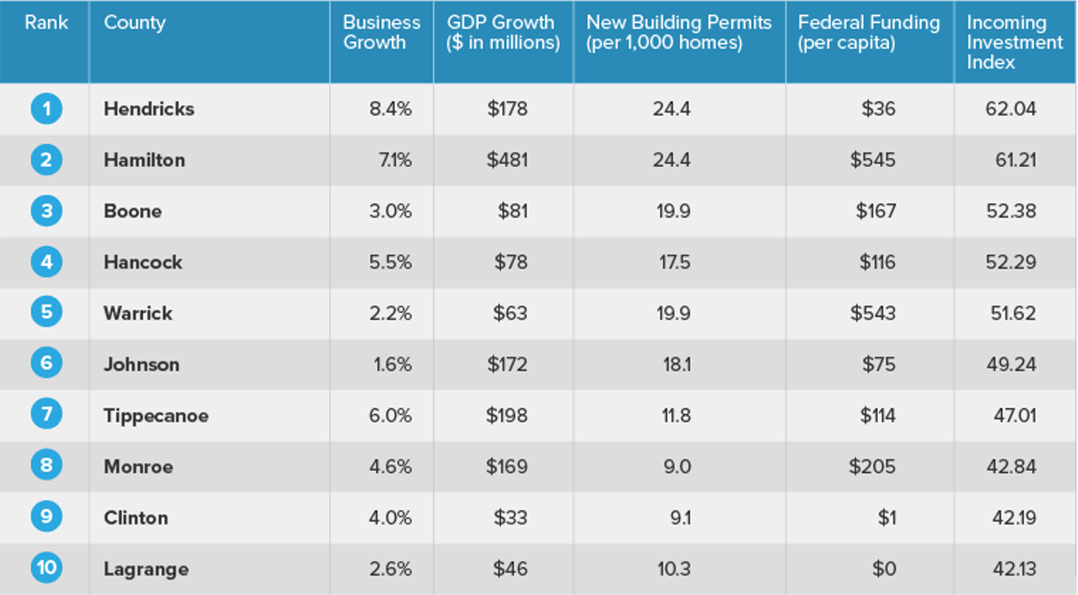 This chart shows the data gathered for each of the top 10 counties ranked in Indiana with the highest amount of investment in the local economy. (Submitted chart)

According to a recent study by SmartAsset, a financial technology company, Hamilton County ranks second on a list of Indiana counties that invest in the local economy.

Hendricks County ranked just ahead of Hamilton County, which was followed Boone, Hancock, Warrick, Johnson, Tippecanoe, Monroe, Clinton and LaGrange counties to round out the top 10.

“Investment in local economic expansion can produce significant improvements in quality of life for communities,” SmartAsset stated in an explanation of its study. “Hamilton County ranked among the top places in Indiana due to a strong showing in each of the factors considered, including business growth, GDP growth, new building permits and federal funding.”

Four major factors decided the rankings, including the change in the number of businesses established in each county during a three-year period, showing whether or not people were starting new business ventures in the area; GDP growth; investment and development in the local residential real estate market, calculating the number of new building permits per 1,000 homes; and finally, federal funding received by each county.

To read more about the study, visit smartadvisormatch.com/data/places-with-the-most-incoming-investments/indiana.