You are at:Home»Current in Zionsville»Zionsville Community»Zionsville man runs to raise money for Best Buddies

The One America 500 Festival Mini Marathon is a time-honored tradition in the month of May. It’s the largest half-marathon in the United States, attracting runners from around the globe. Some participants choose to run as a commitment to health while others participate to bring awareness or raise money for causes they love. 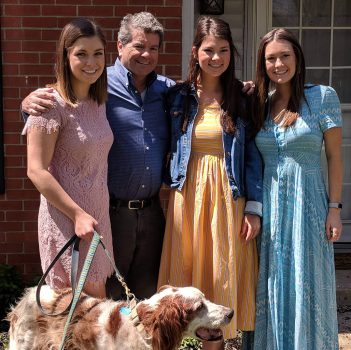 “I was introduced to road races by a neighbor, Marlene Hallam,” Leonard said. “I missed the first run in 1977. I ran in 1978 and have ran every year since.”

Leonard has chosen different causes to support each year.

This year, Leonard plans to raise money for the Best Buddies organization. The nonprofit is dedicated to creating one-to-one friendships, integrated employment, leadership development and inclusive living for individuals with intellectual and developmental disabilities.

“I’m working closely with Sean Grannan,” Leonard said. “His girlfriend, Lexie Neville, has a sister with Down syndrome, and they’ve really benefited from her sister Kelly being involved in Best Buddies, and so I thought we should help the organization.”

Leonard’s three daughters have been involved with Best Buddies. His daughters Clare and Colleen are running with him this year and helping to raise funds. Leonard also is a member of Zionsville Century Club. To donate to his run, visit oii.fyi/27m.