You are at:Home»Current in Carmel»Carmel Community»Carmel mom vies for Mrs. International crown

Lauren Hughes is fully embracing her new pageant crown because it gives her a chance to promote her platform of women’s health.

The Carmel resident was recently named Mrs. Indiana International and will compete for the Mrs. International 2019 title July 19-20 in the final competition at Charleston, W. Va. She’ll compete against women from different states as well as other nations. 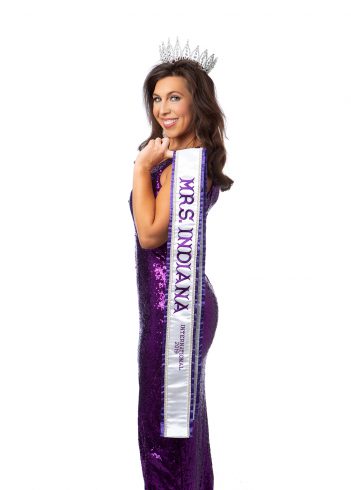 “I was selected among numerous women by a national judging committee after a comprehensive interview and application process,” Hughes said. “I’m proud to be part of International’s system because they (care) about more than physical appearances. They really focus on married women’s accomplishments and our charitable involvement and our commitment to our platforms.”

“It’s another reason I chose the International system, because they align with the American Heart Association’s Go Red for Women campaign,” she said. “This gives me the opportunity to really focus on it and to really spread that message of taking care of your heart and health.”

Hughes, who works for Empower Retirement as a senior client relationship manager, had the same platform in 2018 when she competed as Mrs. Carmel in the Mrs. Indiana competition, which is part of the Mrs. America pageant system.

“It was a great experience meeting the other women,” said Hughes, who had never been in a pageant before.

“With working moms, it’s about taking care of ourselves and being fit and not just being able to stand in a swimsuit and look good,” she said.

Hughes and her husband, Chris, took part in the Feb. 8 Red Dress Dash.

“Even the guys wear red dresses, so he’s pretty awesome to go do that with me,” Hughes said.

Hughes also took part in the Go Red for Women fashion show Feb. 27 at the Palladium in Carmel.

Heart disease runs on her father’s side of the family and congenital heart defects on her mother’s side.