“I moved into the Stutz in 1991 when there were only a few artists in the building at the time,” the Carmel artist said. “In 1993, only a couple of years after Turner Woodard purchased the building, a group of about 10 of the original artists decided to have the first art show. We didn’t know what to expect but were overwhelmed when a couple of thousand people came through. We didn’t charge anything to get in, and needless to say, accommodations at that point were pretty lowbrow. The atmosphere was electric. We all sold work and a great time was had by all. 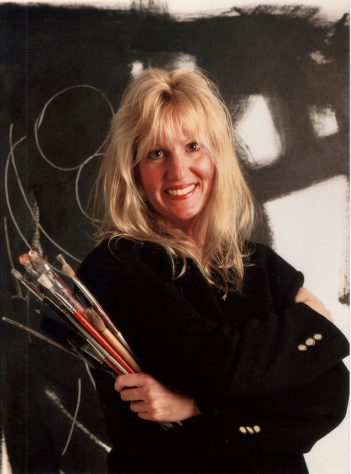 Carmel artist Cindy Wingo has had a studio in the Stutz Business and Arts Center since 1991. (Submitted photo)

“Each year the event has grown, now to more than 6,000 people coming through, so we’ve had to increase the amount of security necessary to keep everyone safe and it became necessary to charge for the event to pay for that.”

“When I moved into Stutz, I was doing portrait work almost exclusively, but the space allowed me to open up for painting,” Wingo said. “Initially, my work was tightly realistic, but I soon found my voice through abstraction. However, I don’t believe one can abstract what they can’t draw to begin with. Painting helps me to work through so many things in life. Whether it’s about racism, politics or religion, each painting tells a story, so I call them abstract narratives. I’ve painted ‘Stone Stacks’ as a metaphor for life’s balance and support of one another and political pieces such as ‘Dorothy, We’re Not in Kansas Anymore,’ which I painted right after 9/11. ‘Ninth Ward’ was painted after Hurricane Katrina, “Pray for Peace” after being at war with Iraq after many years. The paintings become a sort of diary for me.”

The Stutz Building is home to approximately 70 artists.