The Gold Award is the highest honor a Girl Scout can achieve.

The blessing box is a mini food pantry which community members have access to 24/7. 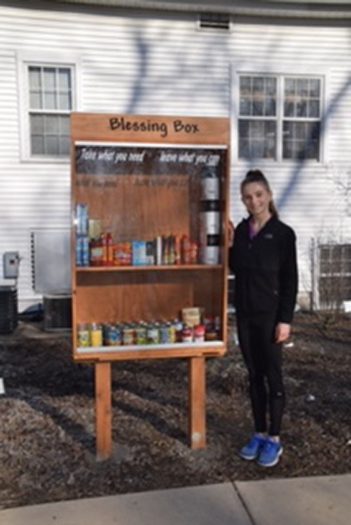 Hannah Semler pauses next to her blessing box. (Submitted photo)

“The idea behind the box is take what you need, leave what you can,” Semler said. “The idea is for the community to run it once the word gets out.”

Semler said ideally, people will donate nonperishable food items, and when someone is in need of food, they take what they need from the box.

Semler, 17, is a Juliette Scout, meaning she doesn’t belong to a specific troop. She is homeschooled and decided to continue with Scouting even though her troop disbanded in elementary school.

Semler said her family has been involved in giving back to the community through the local food pantry, Open Doors.

Semler said the project took approximately a year to complete. She has submitted her final paperwork for the Gold Award to the Board of Reviews, and her Gold Award ceremony will take place in early May.