You are at:Home»Current in Fishers»Fishers Community»May 4 Wrestling event to support Fishers youngster

When Amy Armstrong discovered her 12-year-old son Brady was diagnosed with Hodgkin’s lymphoma in January, she soon discovered her family was not in the struggle alone.

Brady, a sixth-grader at Fall Creek Intermediate School, had been a member of the Fishers-HSE Knights football team, a traveling football team for fifth- and sixth-graders, in the fall of 2018. The fathers of the other sixth-graders began to brainstorm ways to help.

One of the fathers happens to be Kevin Fertig, 42, who was a pro wrestler for WWE for 14 years under the name Kevin Thorn. He participated in WrestleMania 23.

“It’s in my wheelhouse, so I said, ‘Why we don’t have a wrestling exhibition?’” Fertig said.

“Their support has been incredible,” Armstrong said of the football dads. “Kevin was one of the first people I reached out to because I knew he would make Brady laugh.”

Armstrong first thought her son had a pulled muscle when he noticed a knot near his groin area. It was soon diagnosed as lymphoma. A CAT Scan and MRI also revealed a spot on his brain.

“But after two rounds of chemotherapy, it went away, thank God,” Armstrong said. “We treated it as stage 4 (cancer), which means aggressive chemotherapy.”

Brady will have a round of chemotherapy ending two days before the fundraiser, but he should be able to attend the event.

“I think as long as he wears a mask and gloves, he should be fine,” Armstrong said.

Three days after the event, Brady is scheduled for his last round of chemotherapy. Three weeks of radiation will follow.

Brady is missing baseball season and his mother said the steroids have caused a weight gain.

“He handles everything well,” Armstrong said. “He’s a happy kid. He hasn’t been upset, maybe just one time.” 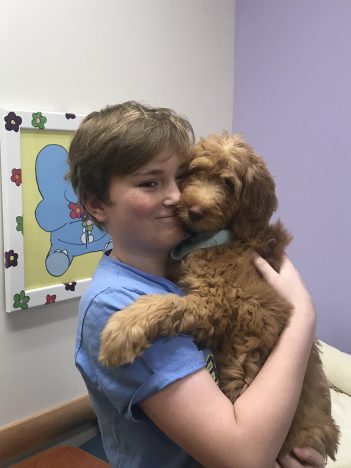 Brady Armstrong with his puppy, Maxie, that was given to him by the Little Wish Foundation. (Submitted photo)

The Little Wish Foundation gave Brady a golden doodle puppy named Maxie. It was named for Max, a child who lost his life to cancer and was the inspiration for Little Wish founder Liz Niemic to start her organization.

“We think it’s going to be a great family event to help his family out with medical bills,” said Fertig, who has lived in Fishers for 15 years and has a real estate business. “(Wrestling) is still fun. I try to do mainly fundraisers.”

“We’re going to try to do one of these once a year to give back to somebody,” Fertig said.

Brady is the youngest of Amy and Patrick Armstrong’s four children. The others are Brenna, 23, Maggie, 22, and Sean, 19. All three siblings are Hamilton Southeastern High School graduates.