Carmel High School senior Josh Schumann’s weeklong trip to Italy to play for the American Football Worldwide Elite Team included visits to the Coliseum, Vatican City and Florence and a side trip to Switzerland.

The best part, however, was the friendships he forged. 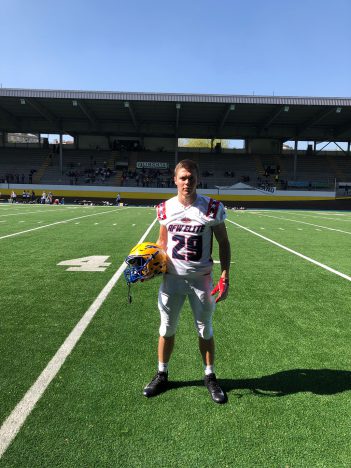 “I ended up making friends with five dudes that live around Chicago and go to different schools,” Schumann said. “We were hanging out in each other’s hotel rooms, staying up late and had a good time.”

Schumann played outside linebacker for the Greyhounds, who reached the Class 6A state championship game before losing to Warren Central in November 2018. For the AFW Elite Team, he played free safety. He had three tackles and forced a fumble in a 58-0 romp March 30 against the Italian U19 National Team in Milan.

“The game was fun because the whole Italian team was happy to have us there,” Schumann said. “They were extremely welcoming even though we were smacking them. It was different than anything I experienced before. They weren’t getting frustrated.”

Schumann played the whole game at free safety because he said he was the only player to practice at that spot. It was the final football game for Schumann, who will attend Purdue to major in economics in the fall.

The team got up early and practiced for two hours each day before going on a sight-seeing excursion.

Schumann, the only player from Indiana to make the seven-day trip, knew what to expect because his older brother, Justus, a 2016 CHS graduate, made the trip as a senior.

“He’s always bringing it up as one of the coolest things he’s ever done,” Schumann said. “I had never been out of the country before that, so it was a cool thing to experience that on my own.”

Schumann returned to the U.S. March 31 and then joined his family and friends for a week in Florida.

“I got to miss a week of school and then go on spring break,” he said.