You are at:Home»Current in Carmel»Carmel Community»Carmel Man to Run Boston Marathon to Benefit Cancer Endowment

“Throughout high school and college, I always played other sports,” Koke said. “I always thought of running as sort of a penalty. When you get in trouble with a coach, it’s ‘go take a lap.’” 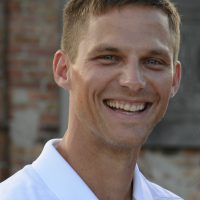 However, once Koke discovered the competitive aspect of distance running, he said he fell in love with the sport and began participating in marathons. Now, Koke, 35, is running to make a difference. On April 15 he will run the Boston Marathon to raise money for the Caroline Symmes Cancer Endowment.

The endowment, which funds pediatric cancer research, is named for 5-year-old Caroline Symmes, who lost her life to Wilms Tumor Disease in 2009. Koke’s employer, Edrington, agreed to contribute a matching donation of $25,000 once Koke’s fundraiser for the endowment reached $15,000. Koke has already surpassed that amount.

Koke is dedicating each mile of the 26-mile marathon to a pediatric cancer patient.

“What I decided to do is run the race with 26 kids in mind. These are kids that have through the fight, some of them didn’t make it, others have recovered and some are still fighting today,” Koke said. “I’ve thought about those last six miles, those are some of the hardest miles there are, and in my mind I’m thinking—I’m gonna have these kids’ names on my arm. That’s what I need. If they can fight, then I can fight for them.”

To learn more about the Caroline Symmes Cancer Endowment, as well as the 26 cancer patients that Koke is running to honor, visit carolinesymmes.org/runningforriley.