“But being a cyclist, when Nebo went out of business, I felt we needed something up in this area,” Boggs said.

The Zionsville resident is co-owner with Brian Gootee of Gray Goat Bicycle Co. North, 4335 W. 106th St., Suite 900, Carmel. The shop, near the Carmel and Zionsville border, opened March 5 in the former home of Nebo Ridge Bicycles, where Boggs was a regular customer. 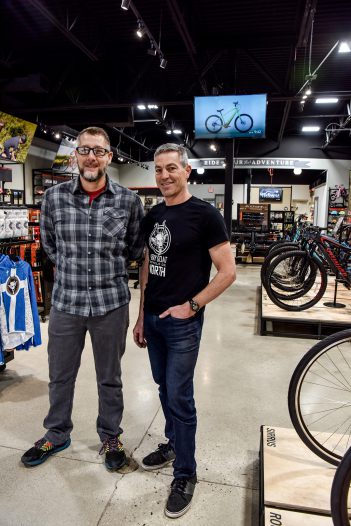 Gootee, a Waverly resident, is owner of Gray Goat Sports, which also has shops in Indianapolis and Franklin.

“I work at Eli Lilly, so I’m just helping with financing and (am) part-owner of this Gray Goat North,” Boggs said.

“I’m not a bike-shop guy. That’s why I partnered with Brian Gootee,” Boggs said. “I’m a regular enthusiast for biking and supporting the cycling community. I know there is a cycling program trying to get into the Zionsville Schools and we’re going to be supporting that as much as we can.”

Boggs said Gray Goat is continuing to conduct Tuesday and Thursday evening rides, sponsored by the Central Indiana Bicycling Association, from the shop like as Nebo Ridge previously did.

“It’s always good to start and finish at a bike shop like this,” Boggs said. “On nice days we’ve had anywhere from 70 to 80 to 100 riders. We plan to carry that on and be good stewards of bicycling and proponents of cycling in the Zionsville and Carmel area.”

“He’s always been involved in the cycling business,” Boggs said.

Boggs said he has been helping out after work and on the weekends.

Boggs’ wife, Sharon, is a first-grade teacher at Union Elementary. They have two sons, Ian, 26, and Beau, 23. Ian, a former Indiana University swimmer, is a part-time employee at the store. Ian also coaches triathletes and is an assistant Zionsville Swim Club coach.