You are at:Home»Current in Fishers»Fishers Cover Stories»Home Away Home: FFD headquarters moves into Indy Fuel apartment complex on 126th Street

Fishers Fire Dept. Station 391 firefighters will have a change in scenery for the next 16 to 24 months. They will be housed on the first level of the Indy Fuel apartment complex at 126th Street and Fuel Way as their headquarters at 2 Municipal Dr. undergoes a complete demolition and rebuild.

The move happened March 4. The one- and two-bedroom apartments were outfitted with an alarm system to alert firefighters of emergency runs.

Four of the units are two-bedroom and two units are single-bedroom. Motorola set up a mobile radio in the makeshift department’s day room and then wired an external speaker that runs into each of the bedrooms.

FFD Capt. Todd Rielage said the first floor of the complex can house 10 firefighters, approximately the same as the station’s headquarters.

“There’s no loss of service. We didn’t have to move any trucks out of our district,” Rielage said.

All five of the station’s vehicles — a battalion, a medic unit, a tactical rescue, an engine and a ladder – fit in a temporary barn constructed on the complex’s property. When the firefighters receive an emergency call, they hurry from the apartments across a parking lot to the vehicles in the barn.

FFD Capt. John Mehling said there will be no delay in response time. 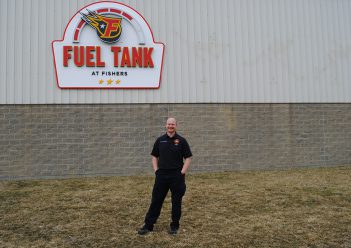 FFD Capt. Todd Rielage said firefighters will remain at the Indy Fuel complex for 16 to 24 months.

Rielage said 90 percent of the amenities from the original headquarters were relocated to the temporary apparatus facility. There are places to store gear, work benches and all the supplies. However, what the department does lack at its temporary station is a gear washer and drye and an SCBA, or self-contained breathing apparatus, fill station to refill the oxygen bottles after a fire or training.

To fill the tanks, the firefighters will visit one of the other stations immediately following an incident. Truck washing also must be done at another station.

The headquarters at 2 Municipal Dr. was 30 years old, and Rielage said after a third-party audit was done on the building, the decision was made to demolish and rebuild the headquarters at the same address rather than renovate it. Demolition will begin next month.

“The key thing to remember about the station is there were somewhere between 8,000 and 10,000 people in the town (when it was built),” Mehling said. “The Town of Fishers was very small. That station was originally built for a total of six firefighters, and it got to the point where firefighters were literally on top of each other.”

Mehling said several pieces of equipment will be salvaged from the headquarters and used elsewhere in the city.

The demolition and remodel is expected to cost $9.4 million and is funded by a portion of the 4-cent 2019 property tax hike approved by the City of Fishers in late 2018. 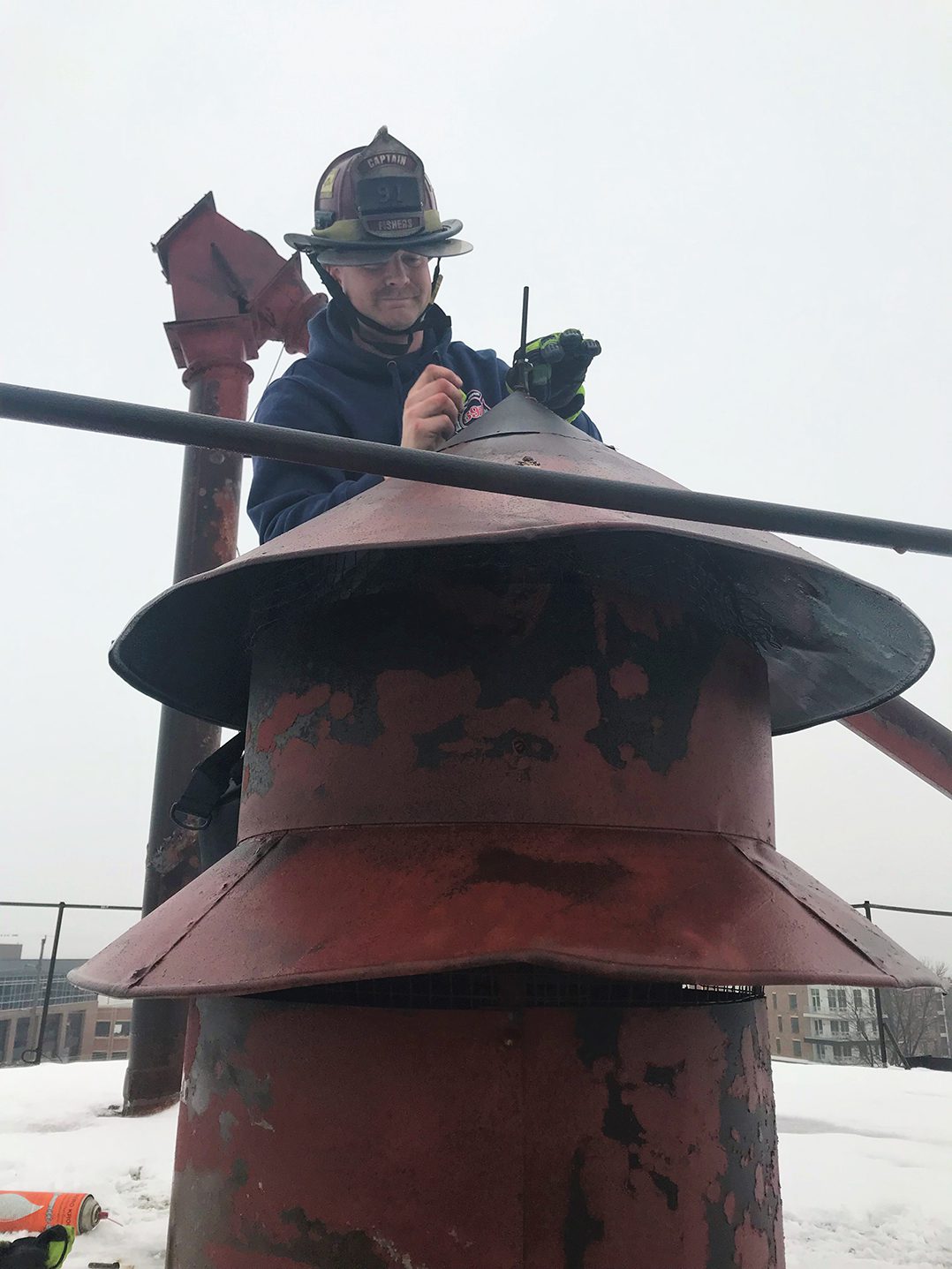 A siren from a grain silo was removed and Fishers firefighters want to restore it at the new fire department headquarters at 2 Municipal Dr. when a rebuild is complete. Capt. Todd Rielage works to free the siren from the grain silo. (Submitted photo)

1960s siren to be restored at new fire department headquarters

In mid-February, Fishers firefighters took a piece of Fishers Fire Dept. history down from the grain silo and will begin to restore it with a goal of integrating it into the new fire station being built to replace Station 391 at 2 Municipal Dr.

Firefighters removed an old siren that was used in the 1960s and ‘70’s as a way to alert volunteer firefighters of an emergency. The population then, according to the U.S. Census, was estimated at 344. Similar to a tornado siren, the device roared a warning across the townships, and it has sat unused on top of the old grain silo behind the Nickel Plate Bar & Grill, 8654 E. 116th St. for decades. The siren was originally obtained from the Indiana Civil Defense and hoisted by hand to the top in the mid-1960s.