You are at:Home»Night & Day»Artist Profile»Fishers doctor and son collaborate to write musical about emergency room

As an emergency room physician, Dr. Jeff Foy often thought the ER would be a perfect setting for a musical.

“I’m a big theater fan,” the Fishers resident said. “For years, I thought it would be a cool thing to do, but I didn’t have the musical talent to do it, so it was sort of just a pipe dream.”

That changed, however, as his son Jacob grew older. 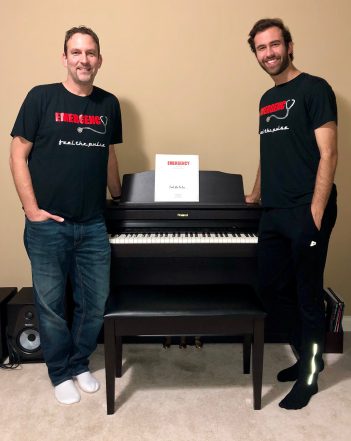 “As Jacob became more proficient in writing music, I came to him with the idea, and he said, ‘Let’s do it,’” Foy said.

The father-son duo partnered to write the musical “Emergency.” It will be performed three times in the New York Theater Festival in August and is set for an off-Broadway run in 2020.

The two started writing when Jacob was a Fishers High School junior. Jacob, a 2017 FHS graduate, is majoring in music at Indiana University.

Jacob performed in FHS musicals and joined show choir his sophomore year at FHS. He is now a member of the IU Singing Hoosiers.

“Pretty much every step of the way was collaborative,” Jacob said. “We worked together on the book. He did most of the lyrics and I did the music. Even the re-writes of the songs was all a collaborative process.”

The first draft was completed in December 2016 and has changed a lot since then, Jacob said.

The musical was staged by IU students, who produced, directed and acted in the show at a black box theater at IU in the fall of 2018.

“We thought it was terrific,” Foy said. “You can read it and read it, but nothing tells you how it is until you see it up on stage and see how people react. We learned a lot about the show from having people there watching it.”

Since that time, they have added a song, cut scenes, changed character and cut songs.

“We liked it a lot, but we think we’ve made it better now,” Foy said

There are two versions. One is two hours and the other is 90 minutes.

“It’s a comedy, but there are a lot of touching and sincere moments,” Foy said. “When we wrote it, we wanted it to be in the vein of what we really see in the ER. Our days in the ER are happy and sad. We see life. We see death. We see people at their best and people at their worst. We see strange things and funny things. We wanted a little of that flavor in the show.”

Foy said they worked with Tony Award-winning producer Ken Davenport for 15 months to help find the best route. Fox said they have flown to New York several times to meet with Davenport.

The 90-minute version was prepared for this summer’s festival. Foy said they will likely return to the two-hour version for the off-Broadway run.

“The off-Broadway theaters are 100 to 499 seats, and several shows have gone to Broadway from off-Broadway, like ‘Avenue Q,’ ‘Jersey Boys’ and ‘Be More Chill,’” Jacob said. “So, it’s just a step below Broadway.”

Foy is fundraising and securing investors. He said they have hired a casting director, Daryl Eisenberg, and will hire a director and then put out a call for the cast.

The best part of the project is the times the father and son have shared.

“It couldn’t be better,” Foy said. “We get to spend hours writing, laughing and coming up with crazy ideas. Some of the fondest memories we have are the laughing sessions at 2 a.m. in a hotel room in New York because of a crazy idea we have.”