Hosner performs as Torvald in “A Doll’s House, Part 2,” which runs through April 7 at the Indiana Repertory Theatre in Indianapolis. The story revolves around Torvald’s wife, Nora, returning 15 years after leaving her family. 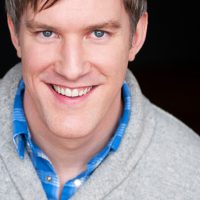 ‘While this play is emotionally challenging as an actor, Lucas Hnath’s script is a joy to perform, and the entire cast is relishing the playing of it,” Hosner said. “It’s such an engaging, funny, moving and compact story. Of all the productions I’ve been involved in over the years, I can think of few I’ve been more excited to bring to an audience. Hnath is a genius. The play may be set in the 1890s, but it couldn’t be more fresh and current, both in style and content, and yet Hnath somehow honors and continues to illuminate Ibsen’s original work.”

Earlier this year, Hosner was in a production of ‘Photograph 51” at the Court Theatre in Chicago. He said there are a number of similarities with the roles.

“Both deal with choices we make, living with those choices, and how regret versus accepting the results of those choices and moving forward can shape the rest of our lives,” Hosner said. “Both Maurice and Torvald are haunted by decisions and events of the past.”

Hosner performed in “Holmes and Watson” at IRT in the fall of 2018. Prior to that, he played Aramis in “The Three Musketeers” in IRT’s 2016 production.

“I’m thrilled to have been a part of three productions in less than three years,” said Hosner, who has been based in Chicago for 16 years. “As someone who has worked in New York, Chicago and Los Angeles, I hope the Circle City appreciates how fortunate they are to have a theater of this consistent high quality and with such vital artistic leadership. IRT is right up there with all three of those cities.”