You are at:Home»Current in Carmel»Carmel Community»Mathis receives 1 year probation after guilty plea

Former Indianapolis Colts defensive standout Robert Mathis pleaded guilty March 12 to operating a vehicle while intoxicated and was sentenced to a year of probation.

The sentence also prohibits Mathis from consuming or possessing alcoholic beverages or visiting establishments that sell or serve alcohol that aren’t open to minors during his probation. 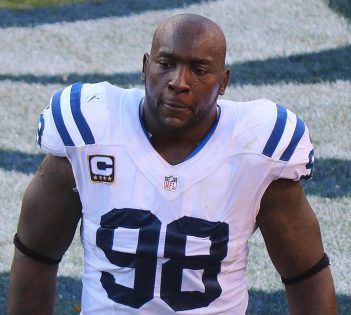 Mathis was arrested in October 2017 after a Carmel Police Dept. officer spotted him shortly after midnight traveling the wrong way on a one-way street and failing to use a turn signal. His blood alcohol concentration was below the legal limit, but police determined he was impaired and not able to safely operate the vehicle. Reports state Mathis told the officer he had used a sleeping aid with alcohol.

Mathis was set to have a jury trial March 7, but two days before it was set to begin his attorneys filed a motion to change his plea.

Mathis, a Carmel resident, played defensive end and linebacker for the Colts for 14 seasons and is a pass rush consultant for the team.