“He demanded a lot,” his oldest son, Billy, said of his late father. “But he was fair. You didn’t feel intimidated, even though he could be stern.” 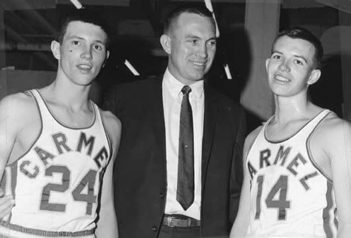 “He had an unbelievable way of motivating without dictating,” Dave Shepherd said. “Hinkle had some special sauce he gave Dad, because Dad could coach.”

Shepherd, who had a long successful career as a Carmel High School basketball coach and athletic director, died March 14 at age 91. Shepherd fell in April 2018 and suffered internal bleeding leading to other complications.

“He went through hell the last 10 months. It’s been terrible,” Dave said. “He’s at peace now.”

Shepherd became the first Indiana coach whose son became Mr. Basketball when Billy earned the title in 1968. Dave won the Mr. Basketball award in 1970.  Shepherd is still the only head coach in state history to have two sons win Mr. Basketball.

Shepherd came to Carmel in 1958 after coaching at Mitchell High School.

“He helped to found the Carmel Dads Club,” Billy said. “Then he led Carmel to their first sectional championship in 41 years in 1966.”

“He was the founding father of all that athletic success for all sports,” Billy said.

Dave said his father wanted to see Carmel excel in all boys and girls athletics.

“Even in the sports that weren’t revenue producing, he wanted to go out and get the best coaches he possibly could,” Dave said.

Carmel Dads’ Club President Jack Beery said Bill Shepherd would ask about the program every time they saw each other.

“He was a true ambassador for the youth of Carmel and the athletics program for many years,” Beery said. “A great deal of the success we have enjoyed  had to do with his leadership and hard work.”

Shepherd, who was a 1945 Indiana All-Star in basketball at Hope High School, and Billy and Dave are all Indiana Basketball Hall of Fame members.

Carmel Clay Historical Society executive director Debbie Gangstad, whose father Eric Clark won the school’s first basketball state title in 1977 when Shepherd was athletic director, met Shepherd for the first time when she was 5 years old when her parents moved next door.

“Meeting Mr. Shepherd as a 5-year old child, I had the same impression of him as I do 60 years later,” Gangstad said. “He was a kind and good man who was always supportive of me and thousands of other Carmel kids. Bill Shepherd’s contributions to the success of Carmel High School athletics directly influenced the community’s success. His passing is the end of a special era in Carmel.”

In addition to Billy (Connie) and Dave (Sally), Shepherd also is survived by his daughter, Cindy McCurdy, and son, Steve, 18 grandchildren and 31 great-grandchildren. Shepherd’s wife, Edith, died in 2011.