Josh Eger got his first taste of performance comedy while working a summer during his junior year at Noblesville High School.

He took an immediate liking.

“Every Thursday night we would have a skit night, which were typically improv skits,” Eger said. “I was new on the staff that year, but I quickly left a mark being in some of the most notable skits that summer.” 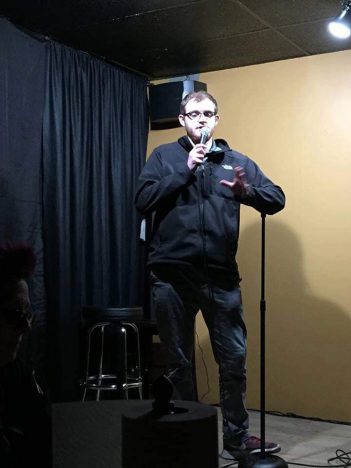 Four years later, Eger is still leaving his mark in comedy — both as a standup comic and as creator and host of the Third Saturday Comedy Showcase series at Logan Street Sanctuary, a downtown Noblesville nonprofit at 1274 Logan St.

Eger, 21, was given the green light to launch the series, which showcases local comedians on the third Saturday of each month in LSS’s 65-seat performance venue, a year ago after pitching the concept to the organization’s leaders.

“I thought Josh’s idea sounded perfect for LSS,” said board secretary Alys Caviness-Gober, who handles programming, events and development. “Josh books a variety of local and area comedians. Most shows are standing-room-only.”

Eger expects a capacity crowd at the next showcase, March 16, which features local comedians Pj Gadbury (aka ‘Papa G”), Erin Carr, Antonio Edmunds and Mo Mitchell. A $5 donation is requested for admission. Performers receive an equal share of the gate.

“The real value of Noblesville comedy is in the comedic talent that performs at my shows,” Eger said “Basically, the process of finding talent is to meet people at open mics or on the internet. I have seen lots of local acts and know for the most part who is really funny.”

A Noblesville resident, Eger performs a standup routine at each show. His favorite comedians include Dave Chappelle, John Mulaney and Bill Burr. He is inspired by all three.

“For the most part, I am just an open-micer, with about 10 to 20 minutes of material, maybe,” he said. “I always host my own shows, and I’m getting better at that.”

Eger’s career goal is to produce comedy shows and/or own his own comedy club. He is seeking sponsors for the showcase series and is, in the process, getting on-the-job training in the form of booking talent, scheduling shows and promoting local comedy.

“We have (had) a great start,” Eger said. “I know that I have the talent to produce great comedy shows, and someday I would like to be a club owner of some sort. I have toyed with many different ideas, but the basis is I want to build a comedy culture in Hamilton County.

“The goal right now is to try to pack out the show as much as I can and maximize sales.”

Price: $5 requested donation at the door