You are at:Home»Current in Zionsville»Zionsville Community»Community Foundation grant to support HAND expansion 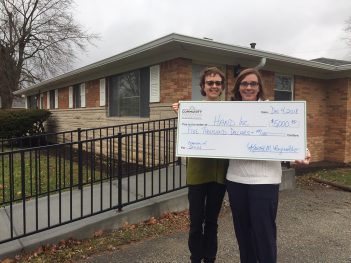 The grant will support HAND’s expansion into Boone County, which began April 2018 when it acquired the Hickory Commons development in Lebanon. The acquisition was 15-year-old HAND’s first project outside of Hamilton County.

“We recently expanded into Boone County and we were looking to build relationships and support there,” said Andrea Davis, HAND outreach and fundraising manager.

HAND already has invested more than $2 million into renovating Hickory Commons, which will provide 28 affordable housing apartments — 17 duplexes on two cul-de-sacs. To qualify for the housing, residents must earn no more than 60 percent of the median income for the area.

“(The Hickory Commons duplexes) were built in the 1950s and in recent years have been rental properties,” Davis said. “Given their age, they were naturally more affordable. We were looking for opportunities to make an investment, update (the homes) and make them more modern for the folks who live there.”

With Boone County’s rapid growth, HAND wanted to stay ahead of affordable housing.

“A lot of people think, ‘Everybody’s rich, why would you need affordable housing?’ What we’ve seen is folks who have lived here a long time are getting priced out of the market,” Davis said. “The price of housing is going up much faster than household income.”

According to five-year estimates by American Community Survey, nearly 20 percent of Boone County homeowners and 44 percent of renters are considered cost-burdened, spending more than 30 percent of their household income on housing.

“As communities try to attract more business development, there’s a need for places for those workers to live,” Davis said. “There’s a wide range of salaries with the jobs being created (in Boone County), but not a huge range of housing.”