You are at:Home»Current in Fishers»Fishers Community»City of Fishers unveils trail plan; trail to act as ‘linear park’

The City of Fishers unveiled the Nickel Plate Trail Master Plan 2040 on Feb. 18 prior to the city council meeting at Launch Fishers. 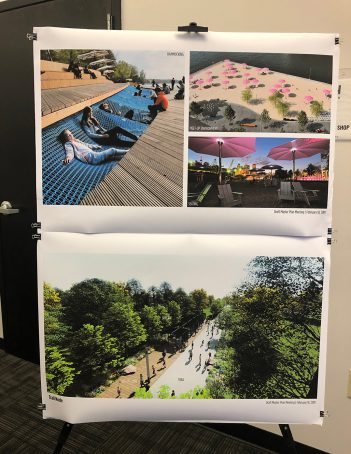 Renderings of the trail were on display at the event.

After a brief introduction about the trail, a video about the process of gathering public input was shown. According to Weingardt, there were 30 opportunities for community engagement, which elicited more than 1,500 responses.

“Our goal is not only to create a unique pedestrian experience for residents in Fishers, but we want to create an experience unlike anything in the Midwest or the world, for that matter,” Fadness said in the video.

Amenities to be implemented along the trail include a viewing deck along the trail at the 96th Street intersection to view the planes landing at the Indianapolis Metropolitan Airport, adding lighting and technology to the tunnel crossing under 116th Street, innovation coves for collaboration along the trail near the Hamilton East Public Library, sculptures, a boardwalk along the trail near Launch Fishers, creating places for people to hang out, recreation for teenagers, kindness rocks, a treehouse, outdoor fitness opportunities and more.

“Parks are not what they used to be. This is the park of today,” NBBJ Design Landscape Architect Tony Murry said about the trail.

“This is an example, I think, of what happens when a city acts more like a start-up,” Wechsler said.

The master plan could take up to 21 years to complete. It is not yet in its design phase, and more feedback from the public will be requested in the coming months. 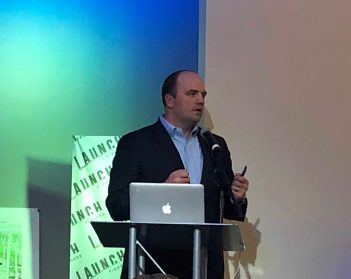 Trail input came from community members young and old, and many of the ideas were given by Hamilton Southeastern Schools students. Fadness presented a certificate of appreciation to the students for their involvement in providing ideas for the trail.

This fall, the city will break ground on the pavement portion of the trail from 106th Street and 126th Street.