You are at:Home»Current in Fishers»Fishers Community»Man celebrates 60th birthday by hiking to Mt. Everest 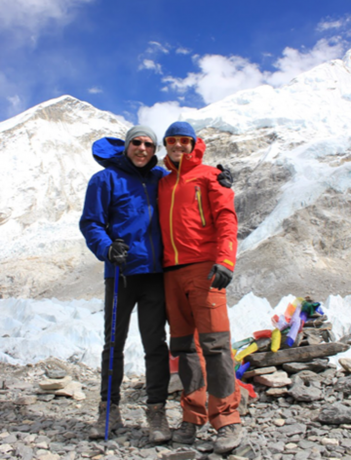 Kevin Slaughter, left, and his son Paul Slaughter hiked to the base camp at Mt. Everest. (Submitted photo)

For his 40th birthday, when Paul was 15, Slaughter joined his Boy Scout troop as a chaperone to hike to the bottom of the Grand Canyon. For his 50th birthday, the pair traveled to Peru for a four-day hike on the Inca Trail to Machu Pichu.

In October, for his 60th birthday, father and son traveled to Nepal and hiked 77 miles in 12 days to the base camp of Mt. Everest.

The trip to Mt. Everest began in Kathmandu, Nepal, where Slaughrer and his son toured the city and visited four UNESCO World Heritage sites. From Kathmunda, they traveled by plane to Lukla and hiked 8.1 miles to Phakding. On the second day, they hiked 6 1/2 miles to Namche Bazar, sharing the trails with donkeys and yaks. They rested on the third day, and on the fourth they hiked 9.3 miles to Tengboche.

“Picture yourself doing a six-hour intense aerobic workout 12 days in a row with 58 pounds on your back at 2-plus miles above sea level,” Slaughter said. “But I wouldn’t have changed a thing. It was fantastic. Plus, I got to do it with my son.”

“It was 98 percent incredible and 2 percent, ‘What the heck was I thinking?’” Slaughter said.

Between days eight and 12, Slaughter and his son made their way back down the mountain to Lukla. The next couple days were spent traveling by plane and van from Lukla to Ramechhap to Kathmandu, followed by a more than 28-hour plane ride home.