Jennie Zawada of Carmel recently celebrated her birthday surrounded by family, friends and some unusual guests—members of the local media. Zawada’s birthday has made her something of a local celebrity, since she is the oldest person in Carmel at 107 years old.

“There’s nothing special about it. I’m just a year older, that’s all,” she said.

Zawada was born in South Milwaukee, Wis. As a young woman, she worked in an apartment building owned by her parents. 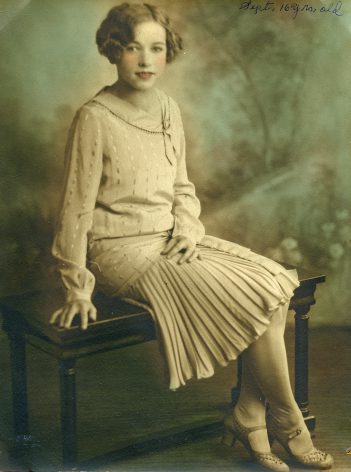 “I was the maid of all work. I did everything that was needed,” Zawada said. “I changed beds, I washed floors, I cleaned the hallways. In general, I took care of the whole apartment building.”

She later married her husband, Stanley. The couple was able to enjoy an early retirement to Florida in their 50s, thanks in part to money that Zawada’s parents gifted them after the sale of their apartment building. Zawada continued living in Florida after her husband died. She mowed her own lawn and even drove on her own until she was 104.

About two years ago, Zawada moved to Carmel to be closer to family, such as her niece, Nancy Dwyer. She now resides at the Magnolia Springs senior living community, which she said she “loves very much,” adding that “the food is excellent and the menu changes daily.”

Although Zawada doesn’t believe there is a secret to her longevity, Dwyer thinks the key is her aunt’s focus on the simple things in life.

“Slow and steady kind of got her where she is,” Dwyer said. “She was always very neat, very clean and took an interest in the small things.”