Within minutes of meeting more than four years ago, Kathleen Ilo and Jonas Kazlauskas realized they had shared goals for their ballroom dancing careers.

“Our goal is to keep the streak in the U.S. and climb a few more spaces in the world,” Kazlauskas said. “That’s why we started dancing together and that’s why we’ll keep on dancing until we get to the finish line.” 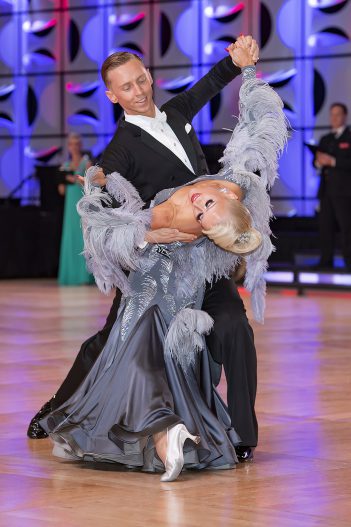 Kazlauskas said the 10-dance can be more expensive for competition because of the need for expert instruction in certain dances.

The two began dating six months after they started dancing together.

Ilo’s parents, Rauno and Kristiina Ilo, former Soviet Union 10-dance champions, own the Starlite Ballroom and Dance School in Indianapolis. Ilo and Kazlauskas are instructors at the school, teaching all levels and ages.

“We have a lot of people who come Columbus (Ohio), Chicago or Michigan just because they’ve heard of our name and they want to come and have lessons,” Ilo said. “They will seek you out if you have done something worthwhile.”

The couple travels frequently for competitions and instruction. In 2018, the couple traveled to London, Italy Estonia, Lithuania, Germany, Belarus, France, China and Thailand.

Ilo was seeking a new partner because her partner at the time was living in North Carolina and she had to travel back and forth. Her father found an advertisement Kazlauskas put up on dancesportinfo.net seeking a partner in the fall of 2014.

Ilo’s father said he seemed to be the right age, height and looks for her.

“It’s like a dating site for dance partners,” Ilo said of the advertisement.

The next day, she messaged Kazlauskas, and the following day, she flew to Boston for a tryout.

“We decided that day we were going to dance together,” Ilo said. “He had a certain amount of achievements, so that was appealing. He is from Lithuania and that’s close to Estonia, so it’s nice to have someone from a similar culture to you. When we met, we had the same goals.”

Ilo’s family moved to Washington, D.C. from Estonia when she was 5 years old and then moved to Carmel when she was in third grade. After graduating from Cathedral High School, Ilo graduated from Indiana University with a biology degree.

“I kind of always knew I would come back to dancing, but for a long time I thought I wanted to be a dentist. Then I decided I didn’t want to be a dentist,” she said. “Right after school, I started teaching and dancing more seriously.”

Kazlauskas moved from Lithuania to England when he was 14. He moved to Boston nine years later. Shortly thereafter, he met Ilo.

“The ideal height would be 5-7 for Kazlauskas for ballroom, but for Latin it doesn’t matter because it’s just a hand connection,” Ilo said. “I wear a higher (heel) shoe and he has to bend a little more. He complains a lot about it, but that’s OK.”

One advantage Starlite has is its full competition-sized floor.

“We’re spoiled. The better the floor, the easier it easy to dance sometimes,” he said.