Geist-area resident Ira Mercurio has always loved to kayak but had trouble transporting his recreational craft.

Loading and unloading a kayak onto a car can be cumbersome. Mercurio recognized a need for kayakers to be able to easily transport their kayaks. That is how he created the EZ Rec-Rack kayak carrier. 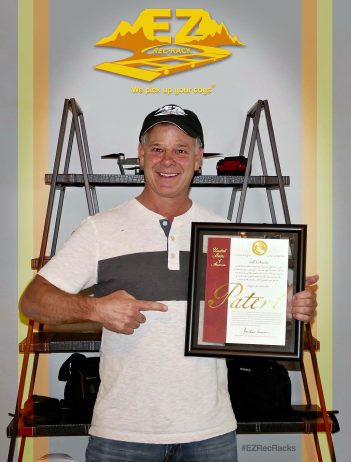 “I started kayaking seven or eight years ago,” Mercurio said. “I started off with smaller kayaks, but eventually the heavier fishing kayaks became more popular, which are really tough to load onto cars. I made a trailer first. We were going to go on spring break after that, but the place we booked wouldn’t allow trailers.”

“I took it to Florida and it worked great,” he said. “It’s kind of snowballed since then, but really it was the need for me to have something to help me load my kayak.”

Encouraged by his wife, Mercurio built more EZ Rec-Racks to sell to other kayakers.

“I filed for the patent mid-March of 2017, and then had a patent completed last August,” Mercurio said. “It was really quick. The lawyer was really surprised that it happened that fast with no questions asked.”

Mercurio believes the reason the patent was granted so quickly is because there is nothing else on the market like the EZ Rec-Rack, which sells for $679.

“It’s all aluminum and then it’s powder coated,” Mercurio said. “The reason for that is a lot of the guys that do these fishing kayaks are saltwater guys, and so anything that’s less than that would just get completely eaten up by the elements.”