You are at:Home»Current in Geist»Geist Community»More than 100 firefighters battle fire at senior living complex in Lawrence

More than 100 firefighters from the Lawrence Fire Dept. and the Indianapolis Fire Dept. battled a fire at the Benjamin Court Apartments, a senior living complex, on Lee Road in Lawrence Dec. 17.

Although 30 of the 62 units were completely destroyed, there were no injuries or fatalities. The first call came into the 911 dispatch center at 12:44 p.m., and firefighters had the fire under control within two hours. 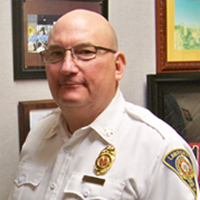 Lawrence Fire Dept. Chief Dino Batalis said it is miraculous no one was injured or killed.

“There was no injuries or fatalities, which is unbelievable with that magnitude of fire,” Batalis said. “I hate to see these things happen, and that happened yesterday (Dec. 17), but the joint efforts with our partnerships with the police, the EMS and the Y – it was just a great partnership getting people out unscathed with no fatalities. They did a heck of a job getting those people out of those buildings, because some of those people are not very mobile.”

Batalis said there’s no idea of what caused the fire, but investigation is under way.

“There were 30 units totally destroyed, and the building consists of 62,” Batalis said. “There’s a common area in middle, and everything east of the common area is a total loss.”

Batalis said an instructional engineer will inspect the west side of the complex to see if those residents can return to their homes.

All residents were displaced, and the Benjamin Harrison YMCA closed to the public to allow for the displaced residents to spend the night of Dec. 17 at the YMCA.

“The YMCA was used as a shelter for the evacuees and the gymnasium was used as a triage center,” part of the statement read. “YMCA staff set up the YMCA as an emergency shelter with the help of the Red Cross, the fire and police departments and even a few National Guardsmen.

“YMCA staff also helped evacuate residents and get them to safety. … Our YMCA staff was courageous and competent as they handled this difficult situation with great grace and expertise.”

The YMCA reopened its doors to the public in the afternoon of Dec. 18.

Information on funding assistance for the displaced residents be posted on the Lawrence Fire Dept.’s social media outlets as soon as it is available.