You are at:Home»Current in Fishers»Fishers Community»Day considers challenging Fadness in mayoral race

Save the Nickel Plate spokesperson Logan Day announced he is considering a run against Fishers Mayor Scott Fadness in the 2019 mayoral race.

Day announced his plan Dec. 6, following a Dec. 4 special budget hearing hosted by the Indiana Dept. of Local Government Finance on the proposed 2019 Fishers budget and the Nickel Plate Trail tax. Day said he is planning on shifting his focus from saving the Nickel Plate Railroad to possibly running as a Republican candidate against Fadness in the 2019 election. 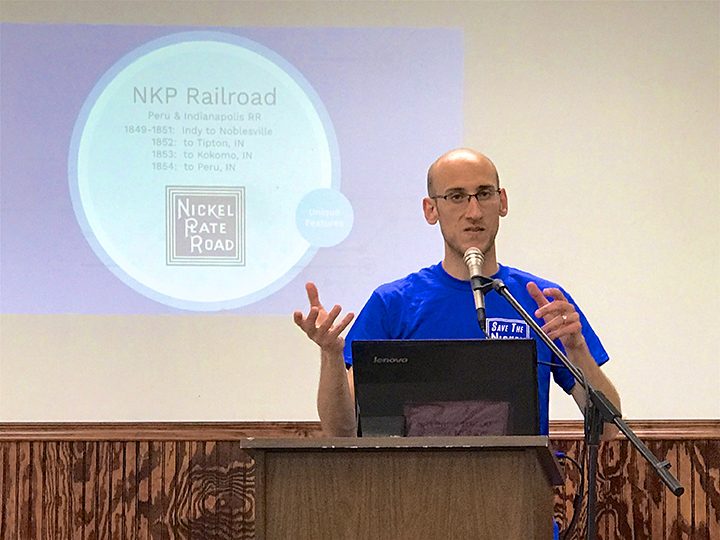 Logan Day speaks at a Save the Nickel Plate Community Listening Session in Noblesville on June 19, 2017. (File photo)

“The two years I’ve spent representing thousands of citizens, who signed a petition against the destruction of the Nickel Plate railroad, has provided me with deep insight regarding the desire of Fishers residents to see a different direction for their city,” Day stated in a press release. “While this community has many wonderful features and new developments, I stand with many long-time residents who would like to see a better approach to how our elected leaders handle government finances, development projects, and public involvement. I believe I can bring the fresh, transparent, sustainable, and respectful approach that many people living in Fishers have told me they want to see. This is why I’ve decided to explore the option to run for mayor in 2019.”

In addition to his involvement with the Nickel Plate Railroad, Day said his platform could include the education system, economic development and government operation. Soon, Day plans to file an exploratory committee to begin formalizing campaign activities.

Day grew up in Brownsburg and studied business at Ball State University. He then temporarily suspended his education so he could launch a startup promotional products company. He then entered the transportation industry as an executive at an ambulance service, then a railroad conductor. Now, Day operates his own consultancy and provides operational guidance to businesses in the transportation industry.

Day lives in Fishers with his wife, Kathleen and their two daughters, Adeline and Isabelle.