The Westfield Washington Historical Society recently added two more Quaker bonnets, a Quaker cape, a school bell and other items to its display. The artifacts are on loan to the WWHS from Westfield Friends Church.

WWHS President Jim Peyton said he’s unsure how long the WWHS will have the display.

“That’s still up in the air. They’ve got it on loan with us,” he said. “Someday, they may say they want it back. We don’t know.” 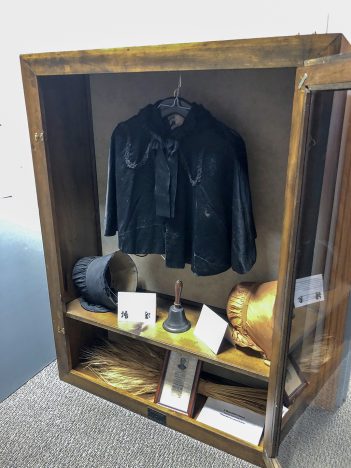 The Westfield Washington Historical Society has a new display featuring Quaker bonnets, a Quaker cape and other items dating back to the 1800s. (Photo by Anna Skinner)

The WWHS had two Quaker bonnets , but Peyton said the new bonnets are historically more interesting. One is black and paired with a black cape. The items are said to belong to Tamer Davis Foudrea, who was born in 1822. The other bonnet is brown and belonged to Elizabeth Emily Bray Beals and dates back to 1829.

Peyton said the most interesting item, in his opinion, is Beals’ brown bonnet. He found a story relating to it in the  book “Our Westfield,” a chronical of the town’s history. The story, by Waldo Beals, Elizabeth Emily Bray Beals’ grandson, recalled when Waldo’s grandfather Lemuel Beals was courting Elizabeth, the pair lived only a mile apart. But Lemeul would have to spend the night with Elizabeth when he visitied because she lived in the woods, which thick and full of swamps, making it too dangerous for Lemeul to venture home in the dark.

“We just thought it was cool that we got that back here in our museum, and that story is in the ‘Our Westfield’ book,” Peyton said. “It’s a great piece of history from the community in the early days. I’m just amazed those things were saved.”