Carmel High School senior defensive end Beau Robbins likely will dwell for a while on the disappointment following his team’s 27-7 loss to Warren Central Nov. 23 in the Class 6A state championship game.

However, the journey to Lucas Oil Stadium was even more unforgettable. 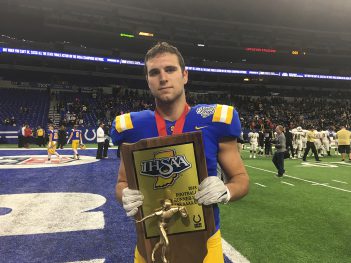 “I think I’ll always look back at this as one of the best times of my life,” said Robbins, who was a starter on the Greyhounds’ Class 6A state champion team in 2016. “I’m so grateful to play for such a great program and so many great coaches. I love all my teammates to death. It didn’t end the way we wanted it to, but I’m very grateful for the experience.”

The 6-4 Robbins, who has committed play football for Indiana University next season, was named the 6A Phil N. Eskew Mental Attitude Award winner.

“The only thing on my mind is we didn’t get the job done,” Robbins said. “It’s a great honor and I’m very honored to receive it.”

A large contingent of CHS football fans helped fill approximately half of the lower section as the Greyhounds took on their Metropolitan Interscholastic Conference rival. The Warriors won the regular season meeting 41-17. The Warriors, ranked No. 1 in 6A, finished 14-0. The No. 3 Greyhounds finished 11-3.

CHS coach John Hebert said the Greyhounds getting to the Class 6A state championship for the fourth time in six years was special.

“One of the best things is the way our older players teach and mentor the young players,” he said. “Their legacy is going to live on for a long time.”

Hebert, a former CHS player and a longtime assistant coach before he became head coach in 2015, said he believed prior to the state final that this was the best CHS defense he has seen.

“We’re not used to not being able to get (opponents’ offenses) off the field, and that happened (against Warren),” Hebert said. “Warren Central is a great team, that’s all it comes down to. They made a lot more plays than we did. You can’t make mistakes like that when you playing a team as strong and accomplished as that.”