For Juddson Updike, playing Bert in “Mary Poppins” was a dream role.

“It was one of those roles I’ve always wanted to do since I was a kid because of the movie,” Updike said. “Dick Van Dyke (who played Bert) is my personal acting hero. He’s the perfect performer, in my eyes.” 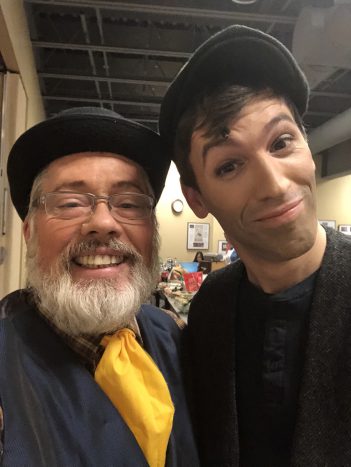 Although it’s not how he wanted to get the role, the Carmel resident did play Bert at Grace Church’s recent production at its Noblesville campus.

On the opening Oct. 26 show, Troy Johnson, who was playing Bert, broke his leg near the end of the performance.

“He was coming back on stage, missed his footing and got a spiral fracture in his legs,” show producer Amy Christie said. “One of the actors about to go on stage pulled him back so he wouldn’t get trampled on.”

At that same time, Updike, 28, was performing in his second-to-last performance of Civic Theatre’s “Anything Goes” at The Tarkington in Carmel.

His parents, Jim and Melinda Updike, were both performing in the “Mary Poppins” performance and informed him Johnson was injured.

Late that night, Updike got a call from the musical organizers. Updike had previously auditioned for the role of Bert at Grace.

“They wanted to know if I could learn the role in 12 hours,” Updike said. “It was fortunate that that closing night of ‘Anything Goes’ was at 5 o’clock instead of 7, because if it was 7 o’clock, there would have been no way.”

A morning show had been scheduled for Oct. 27 at Grace but was moved to the afternoon of Oct. 28.

Updike spent seven hours rehearsing the basics Oct. 27. He left to perform at Civic. He returned 25 minutes before the 8:30 p.m. show at Grace.

“It was surreal,” Updike said. “They needed someone to fill in and I was able to do it. My mom was helping with the script. The directors were giving me cues (through an earpiece) and the cast was helping with the blocking. Everyone was so encouraging, and I immediately felt part of the cast. The first show was the hardest. By the second and third show (Oct. 28), I was having fun.”

Updike then had some more time to prepare before the final six performances.

“It was unfortunate,” Updike said of Johnson’s injury. “I’m just happy I was able to help (Grace) because they had sold so many tickets. It was the show-must-go-on type of thought. The final song is ‘Anything Can Happen,’ and, boy, it’s true. Never in a billion years did I think I’d be closing one show and opening another within an hour.”