You are at:Home»Current in Zionsville»Zionsville Community»Eighth-grader wins on the ice

For Zionsville Middle School eighth-grader Louise MacKay, it was love at first skate.

“My husband and I have only recreationally public skated,” said Karen MacKay, Louise’s mother. “We took Louise to Carmel Ice Skadium when she was 4 to skate and she’s not stopped since.” 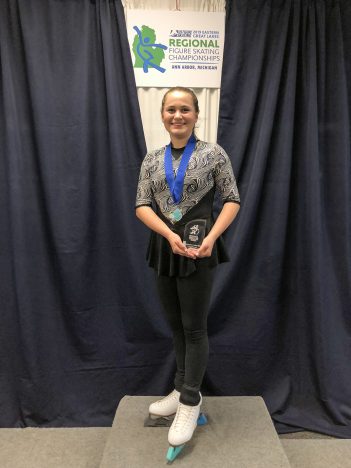 “I’ve won other smaller competitions, but regionals is the first big competition I’ve won,” MacKay said. “The highest I placed in regionals (previously) was fourth place two years ago.”

MacKay, who will compete in the Nov. 15-17 state championships in South Bend, said her training made the difference in free-skate performance.

“I’ve been training harder for this,” MacKay said. “I put in more hours at my rink in Carmel, so that made it easier to complete all my elements. It was a new routine and I had a lot of new elements in it. They were harder elements and the judges liked it more.”

MacKay trains at Carmel Ice Skadium, where she is coached by Marie Millikan (formerly Vichova), a 1968 Winter Olympian from Czechoslovakia. MacKay, a member of the Ice Skating Club of Indianapolis, has been working with Millikan for seven years.

“I started after I took the Learn to Skate lessons and I loved it,” MacKay said. “I started competing and joined the club.”

MacKay competed in soccer and gymnastics when she was younger. She also competed in girls cross country at ZMS this fall.

She does strength and conditioning training, as well as ballet, to help with her skating. MacKay won five gold medals at the state competition in 2017.

“I hope to do the same because I’m competing a level up, so I’m going to see if I can get five medals again,” MacKay said. “A long-term goal for me is to compete in a national competition.”

MacKay is learning how to do a double-axel.