As state officials begin to sort out the process, some local residents are concerned Westfield Washington Schools may be listed as “distressed.” However, WWS staff and State Rep. Tony Cook don’t expect that to happen.

Part of the bill identified Muncie Community Schools and Gary Community School Corp. as distressed, which led to Ball State University taking control of MCS finances and the state of Indiana taking control of GCSC’s finances. When a school corporation is listed as distressed, the bill calls for the DUAB to appoint an emergency manager for the corporation, which reduces its school board to an advisory board that cannot meet more than once every three months. The bill also establishes a list of financial and qualitative indicators to ensure that situations like Muncie or Gary don’t happen again.

Conversation about the bill is evolving, and the DUAB recently proposed a list of fiscal and qualitative indicators which reveal the overall picture of a school corporation’s fiscal health. However, if a corporation appears to be struggling financially, it isn’t immediately placed on the distressed list. The DUAB works directly with the corporation to understand its unique circumstances. Several fiscal indicators, such as credit ratings, outstanding debt, property tax collection percentages, debt service expenditures and other factors may appear negative on the surface, but qualitative indictors such as academic performance, building capacity and utilization, age and condition of buildings, practices and policies of the superintendent and school board in monitoring fiscal health of the school corporation and several others may balance the school out in the eyes of the DUAB.

State Rep. Tony Cook voted for the bill and he said it’s not the DUAB’s intent to take over school corporations or designate them as distressed. Rather, Cook said the DUAB is as a preventative mechanism.

“The intent of this part of that bill is definitely to take in all these indicators, both fiscal and qualitative, that they have here and determine whether that school corporation is experiencing some difficulties, what those difficulties are, where they are out of balance financially and what help and assistance and resources can the state, DUAB and Dept. of Budget provide them and recommend them in their working plan to correct and get back into a financially positive situation versus a distressed situation,” Cook said.

Cook previously worked as superintendent of Hamilton Heights School Corp. from 2005 to 2014. He said the proposed qualitative indicators balance out the fiscal indicators, which may keep schools from landing on the distressed list, especially in a situation such as Westfield’s.

“Qualitative indicators are important to Westfield because Westfield is kind of in a unique situation that Hamilton Southeastern (Schools) used to be in,” Cook said. “They are experiencing such growth so quickly and they’re having to expand classrooms, build add-ons, add staff, so that all the sudden, they look like, ‘Wow, we’re having to put out all this expense and we’re having to go to a referendum to do it.’”

Cook said based on fiscal indicators alone, WWS could appear to be struggling.

“But at the same time, they are growing and assessed value of land and population is going to bring them in more money down the road,” he said. “They may look like this a little now, but five years from now, they’re going to have all these kids and businesses coming in.”

Cook explained fiscal indicators only show information on paper but qualitative indicators paint a more accurate picture. Cook said some school corporations, such as WWS, may have to take preventative measures to make it through their current situation.

“I think they’re going to be fine,” he said.  “They have some tough things to do in planning to get through the time period. I had to cut some instructional assistants and library accommodations in a smaller school setting (when he I was superintendent), but then I was able to add that back on when we grew a little more.” 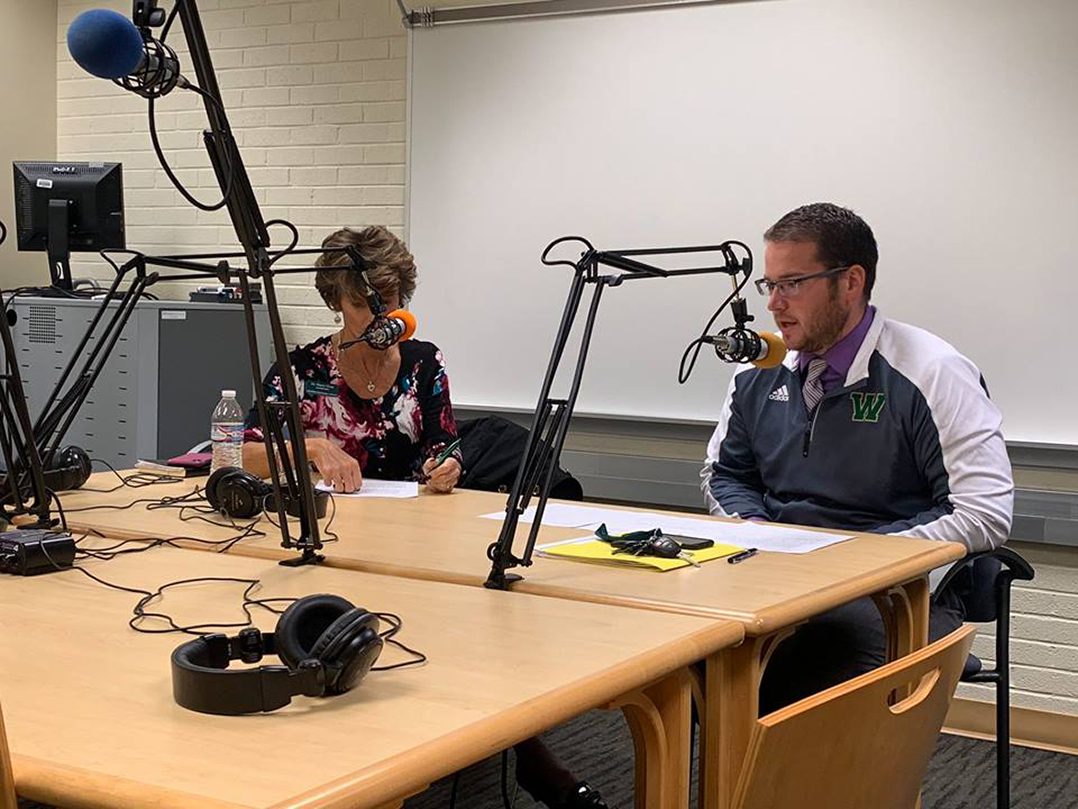 Westfield Washington Schools Supt. Sherry Grate, left, and Chief Financial Officer Brian Tomamichel discuss House Bill 1315 on a recent Inside the Rock podcast. The podcast can be listened to at wws.k12.in.us/domain/536. (Submitted photo)

IMPROVEMENTS TO FUND BALANCE AND ADDING A CFO

One fiscal indicator WWS excels at is debt management.

“As debt decreases, we are being proactive in thinking about projects and any kind of construction or facility needs we might have,” WWS Supt. Sherry Grate said. “We are really trying to be thoughtful on how we plan that for the future.”

Grate said when she became superintendent in 2016, one of the first things she did was hire Brian Tomamichel as a Chief Financial Officer for the school corporation.

“One of the first steps we did was hire a CFO,” Grate said. “With Brian now being in his role for a year, we have had the opportunity to take a deep dive and deep look at where we have been, where we currently are and looking to the future.”

Tomamichel said one of the indicators WWS could improve is fund balance.

“If you look at our fund balances, they’ve been a little low,” Tomamichel said. “We are looking at improving fund balances. A lot of it is based on are you a growing school or are you shrinking school? We are one of the growing schools. In layman’s terms, we need to make sure the budget is balanced, always, and that it’s not only a balanced budget but operating in the black to where we are in the positive.”

“Health insurance as benefits is a huge cost for us,” Tomamichel said. “We are not cutting benefits, but how do you look at the back end of the negotiation side and how is the plan structured? We have worked through a lot of that to have as minimal impact as possible.”

Cook said some school corporations may save by sharing services, such as teachers or purchasing certain items jointly.  Some districts may impose layoffs, while others may shut down buildings.

“(Some districts) may have tough decisions in that respect to try to avoid having to make harder financial decisions,” Cook said.

Cook said school corporations only will be listed on the distressed list if the DUAB’s suggested actions aren’t acted upon.

“You only get on that watch list if you don’t enact the corrective plan that they’ve all agreed on or don’t develop it at all,” he said. “If you’ve lost tons of kids and tons of revenues but made no adjustments for that in the buildings, you have to make some tough decisions.”

Cook refers to the DUAB as a good auditor for school corporations.

“They will try to help you and assist you and connect you with a good plan, to upright the ship so the ship doesn’t sink,” he said. “Before, for a long time, there wasn’t anybody to do that.”