You are at:Home»Current in Zionsville»Zionsville Community»Parks Dept. maintains pioneer cemeteries

Tucked within subdivisions or the middle of fields, several small cemeteries dot Zionsville’s landscape as traces of families who once called Boone County home.

The sites, known as pioneer cemeteries, were created as family plots by some of Indiana’s first settlers. 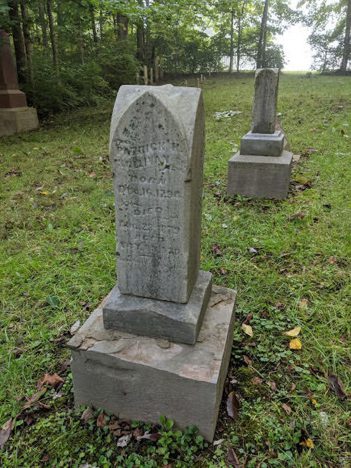 Sheets Cemetery on Irishman’s Run Lane is the final resting place for Patrick Henry Sullivan, who once owned much of the land around Zionsville’s village. Pioneer cemeteries are scattered throughout the county. (Photo by Heather Lusk)

The Zionsville Parks Dept. maintains eight of the cemeteries, mowing and checking headstones for cracks. Eagle Village off Michigan Road is one of the larger ones.

Several of the abandoned cemeteries maintained by Perry and Union townships became Zionsville’s responsibility in 2008, when Zionsville annexed Union Township. In  2014, it annexed Perry Township.

“Many are on private property, and townships aren’t involved at all with those,” said Matt Dickey, Zionsville Parks Dept. director.

The small cemeteries established before 1939 that are not privately owned or maintained by organizations are identified as non-taxable and are maintained by taxpayer money.

Larger cemeteries, such as Zionsville Cemetery, are privately owned and maintained. Other small cemeteries on private land are the responsibility of the landowner.

Sheets Cemetery at 9978 Irishman’s Run is maintained by the family who owns the property. It is the final resting place for familiar names like Patrick Henry Sullivan, who once owned much of the land around the Zionsville’s village, and his granddaughter, Iva Etta Sullivan, who donated funds to create a local museum.

When the Holliday Farms planned unit development opens, the small cemetery on the property will be enclosed and incorporated into the pathway system. Those developing the property have spoken publicly about their desire to maintain Zionsville’s history in the development.

Finding a cemetery on one’s property is not uncommon, according to Dickey. If it happens, he said the homeowner should contact the Historic Preservation division of the Indiana Dept. of Natural Resources. Typicall, the township trustees maintain cemeteries, but Zionsville’s post-annexation reorganization addressed it differently.

“I don’t know of any other parks departments that are involved with (cemeteries) in (Indiana),” Dickey said.