The musical is based on songs written by the band ABBA, but the dancing is what makes the musical “Mamma Mia!” fun when the Zionsville Community High School production arrives at the Zionsville Performing Arts Center Nov. 15-17. 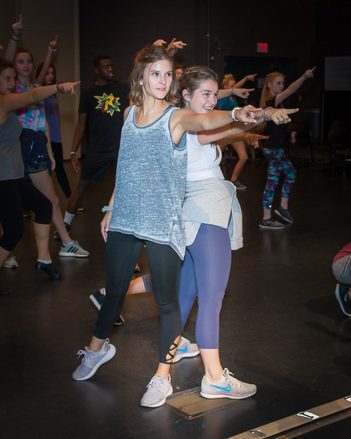 “It really keeps the energy up,” said senior Cynthia Kauffman, who portrays bride-to-be Sophie trying to learn the identity of her father before her wedding.

Senior Sophia Petts plays Sophie’s mother, Donna, who reunites with her best friends for the wedding. The show has a lot of “girl power,” Petts said.

“Just having all my best friends alongside me is just so much fun,” Petts said.

Co-director Anne Beck also is the choreographer. “‘Mamma Mia!’ is such a show that constantly transitions between dance and scene, so I have found the role easy,” Beck said. “There definitely is a lot of dance but (the students’) enthusiasm to learn is wonderful,” said Beck, whose co-director MaryJayne Waddell played the role of Donna in the national tour.

“(Waddell) knows the characters, their needs and intentions so well,” Beck said.

Waddell and Beck, both Broadway veterans, share a passion for educating young artists.

“It’s incredible as a student learning from them just how you can take a bunch of different people’s input and turn it into this incredible art form,” Kauffman said.

“It also ties in some more serious familial issues that are important, but it keeps it light with the fun dance numbers,” Petts said.

“I think it brings a lighthearted air to the community and I think that’s what we need,” Kauffman said.

Tickets are available through zvilleperformingarts.org. Performances are Nov.15 and 16 at 7 p.m. and Nov. 17 at 2 and 7 p.m.