You are at:Home»Night & Day»Entertainment News»Shakespeare farce ‘Comedy of Errors’ set for run at The Cat

When Becca Bartley first read Shakespeare’s “The Comedy of Errors,” it was laugh at first sight.

“I first read the show when I was on a plane and despite trying to remain quiet, there were moments I couldn’t help but audibly react, laughing loudly enough that I got some weird looks from other passengers,” she said of the farce.

The Westfield resident is acting and producing Improbable Fiction Theatre Company’s “The Comedy of Errors” Nov. 2 to 11 at The Cat Theatre, 254 Veterans Way, Carmel. 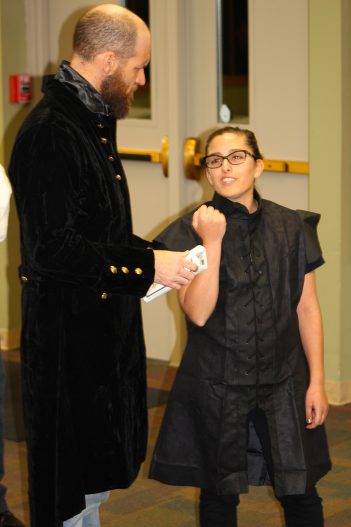 Adam Workman, Indianapolis, and Rowan Whitcomb, Noblesville, rehearse for the “The Comedy of Errors.” (Submitted photo)

“There is a lot of effort going in to each side and, as anything, I wish I had more time to devote to each,” Bartley said. “I have been involved in many aspects of theater over the past couple of decades, but this is my first time being producer. Thankfully, a couple other members of the show are seasoned producing veterans and are helping answer any questions I have along the way. The acting side feeds into my creativity, and the producing plays into my type-A characteristics.”

Bartley said the show features a 20-member cast with a wide range of backgrounds and ages.

“As this is Shakespeare, we of course have to include some fight choreography,” Bartley said. “The Cat is a smaller venue, so it is always a challenge to figure out how to use the space well and get the full effect. For this show, we are doing comedic fighting. Keep an eye out for the difference of speed and, of course, fantastic character reactions.”

This is the first Shakespeare’s play the group has done which they haven’t had to cut down because of length. Bartley said the performance is likely to be under two hours.

“I began performing with the Improbable Fiction people even before the official creation of the company, so I have been with them since its start,” Bartley said. “I have been able to be on stage in many of the performances. The last two IFTC shows I acted in were ‘The Butler Did It Again’ and ‘Much Ado About Nothing.’ Both took place at The Cat.”

“We take the time to develop characters and relationships that fit the show and are believable to the audience,” Bartley said.

Bartley plays Lucinda. Her sister is Adriana, who is married to the main character Antipholus of Ephesus. Adriana is played by Tamara Rulon, a Noblesville resident.

“Tamara and I have been on stage numerous times over the last six years, but this is our first time as sisters,” Bartley said. “Because we work so well together, it has been fun to bring a sisterly love and banter to life. One of the challenges is realizing that Shakespeare, like any author, developed his craft over the years. His ability to build characters in ‘The Comedy of Errors’ was not quite as developed as you may see in other, more well-known works. There are moments when the actor has to take two character traits that do not typically go together and create a believable character. This ended up being a fun task to tackle.”

Shelton and Clinton are founders of IFTC along with Noblesville resident Jeff Bick.

“We started producing shows together at the Belfry in Noblesville and with Noblesville’s Shakespeare in the Park,” Shelton said. “We have a partnership with Nickel Plate Arts as well.”