In its 27th year, the Heartland Film Festival keeps evolving. 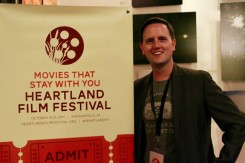 “We keep trying to grow the industry within Indiana,” said Greg Sorvig, Heartland director of film programing. “We split out the short films into their own event.”

Sorvig, a Carmel resident, said the addition of Heartland’s Indy Shorts International Film Festival in July made that possible. Only the Indy Shorts Audience’s Choice and Grand Prize Shorts winners will play at Heartland, Oct. 11 to 21.

“This is the first year Heartland Film Festival will be primarily feature films,” Sorvig said. “In the years past when we had 100-plus films a chunk of those were shorts.  Attendance has been bigger for our feature films, too, so we expand and give shorts the spotlight in July. There are two programs of shorts and the rest are features.”

Sorvig said the Truly Moving Picture Award will be presented for studio films.

“So we’ll have a handful of big Hollywood sneak peaks as well, so we’ll be playing some films with bigger names and films from all over the world,” Sorvig said. “We’ve given more in cash prizes than any other film festival in the world. We’ve given away over $3.2 million since ’92. I’m excited that we identify five films per category up for the big cash.”

There are $25,000 grand prizes for Narrative Feature and Documentary Prizes, in addition to other categories.

“Half of the films that are up for the big cash are directed by women,” Sorvig sad. “That’s pretty rare for festival (films). Additionally, (there are) four event films, opening and closing, and all four of those are directed by women. It’s a hot-button issue and we’re excited to showcase the high-quality work done by women.”

There will be a panel called “Breaking Boundaries” featuring Cady McClain, who directed the documentary “Seeing is Believing: Women Direct,” which is making its world premiere at Heartland. The panel will be at 3 p.m. Oct. 13 at AMC Castleton.

Sorvig said all the filmmakers in contention for grand prizes will be there for the final weekend of the festival.