What to get: Fish tacos

Anna’s take: MashCraft Fishers is a relatively new brewery that opened in winter 2017. It also has locations in Greenwood and downtown Indianapolis, but the Fishers location is the first to feature a full menu. The menu is created by 5280 Bistro, a popular food truck in Fishers. I kicked off my experience by tasting the Bavarian Style Soft Pretzel paired with MashCraft’s own garlic beer cheese, or queso blanco. The pretzel was doughy, buttery, dusted with salt and, because of its size, easily shareable. For my main course, I opted for the fish tacos: two soft corn tortillas filled with grilled and blackened whitefish with a crunchy slaw. A spicy poblano crema is drizzled on top along with a healthy serving of cilantro. Combined with grilled, seasoned whitefish, the dish has a remarkably fresh taste. Potato chips are served on the side. 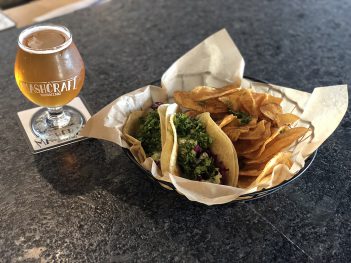 MashCraft Fishers is a relatively new brewery that offers a menu from 5280 Bistro. (Photo by Anna Skinner)

In light of the generous portions, MashCraft’s food prices are very reasonable, and 5280 Bistro is one of my favorite food trucks, so the two make a nice partnership. The items on MashCraft Fishers’ menu are not typically found on the food truck menu, so it allows for some diversity.

Suggested pairings: For the more seasoned beer drinks, pair the fish tacos with MashCraft’s Last Light Blood Orange IPA, which has a citrus note on the front end that pairs nicely with the fish. The citrus is balanced by the hops. For lighter beer drinks, opt for MashCraft’s Gold American Blonde Ale. It’s not as hoppy and is a refreshing beverage to pair with the meals.