You are at:Home»Current in Carmel»Carmel Community»HAND conference examines affordable housing during Westfield discussion

Fishers Mayor Scott Fadness has seen his role change from a town manager to Fishers’ first elected mayor in 2014, and with that came one important realization. 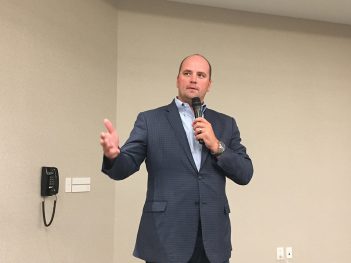 “Elected officials like to stay elected. It’s their singular obsession, that’s what I’ve learned,” Fadness said at Noblesville-based HAND’s (Hamilton County Area Neighborhood Development) fourth annual suburban housing conference Sept. 21 at the Cambria Hotel in Westfield. “They constantly contemplate, ‘How do I stay elected?’ If anyone thinks for one second that affordable housing was something popular with the masses that vote, that they wouldn’t do it, you are sorely mistaken. They all shy away from this particular conversation because it’s an ugly conversation for them.”

Fadness said irrationality festers with the subject and emails fly, Facebook posts and tweets are posted from groups and people that are against everything.

“The worst of human nature comes to the forefront (with concern over their home value dropping),” Fadness said.

But Fadness said the conversation should be addressed in a broader sense, and that an integrated housing policy is necessary for the long-term sustainability of a community.

“Which I actually do believe. We became more productive as a society when you have this serendipitous collection of people from different backgrounds,” Fadness said. “One of the things we talk about with our schools is we need to have diversity, and it always comes back to race. I would argue in Hamilton County what is more ostracized from being a different race is being from a different socio-economic class.”

Shell Barger, a RE/MAX realtor in Carmel, knows how hard is to find affordable housing for buyers in Hamilton County.

“To qualify for a $175,000 home, bare minimum, you have to make $45,000 income and that means no car, no student loans, no debt,” Barger said. “So, you make $50,000 with some debt, who are these people that make that? They’re our firefighters, police officers, our public servants. In Carmel, there are three on the market. It’s a seller’s market.”

“Our redevelopment commission was asked to subsidize a bus to get workers from Marion County to Boone County to Whitestown, specifically,” Norton said. “We’ve given a tax abatement to said company, millions of dollars. We’ve proudly subsidized some of the infrastructure that has been built to allow them to be there. They said now we can’t find workers. Would you go ahead and subsidize a bus to get the worker from Marion County to Whitestown? Are you serious? That was kind of our reaction.”

“We’ve developed on the backs of an industry that cannot find workers in the community where their industry is built,” Norton said. “It’s crazy.”

Norton said many oppose workforce housing because they are worried it will be subsidized housing and affect home values.