While many teens spend hours on social media or other online pursuits, Varuna Dhanabal has spent the last 10 years focusing on one thing: learning Bharatanatyam, a classical Indian dance.

The Carmel High School junior had an affinity for dancing at a young age. 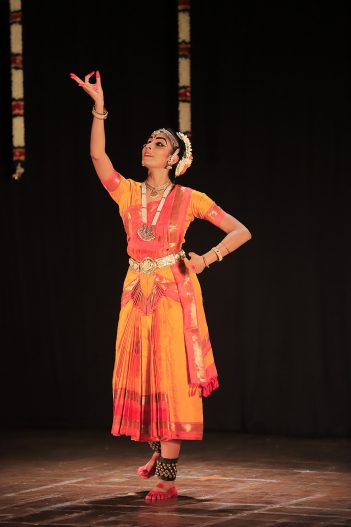 “I started doing normal Bollywood dance for my Indian functions,” Dhanabal said. “Then my mom saw my interest in this and she enrolled me in some classes. From there I haven’t stopped.”

“It’s a classical art form and an ancient dance that was originated around 2,000 years ago,” Dhanabal said. “It includes several hand gestures and complex movements of the feet, eyes and head. I studied the Kalakshetra style. It’s the most pure form of Bharatanatyam.”

As a dancer advances through their studies, they perform an arangetram, an on-stage solo debut.

“There are both emotional performances and performances that test your stamina,” Dhanabal said. “For two hours you get to perform intricate pieces. It’s based on the audience’s examination of you. You know you performed well when the audience is connected to what you’re saying with your performance and your dance.”

In July, Dhanabal chose to perform her arangetram in Madurai, India. The city has special significance for her family and the dance itself.

“This art form is rooted in south India, which is also where my family’s cultural heritage came from,” Dhanabal said. “I think bringing it back to India made me realize how important it is to value this art.”

Dhanabal plans to continue to study the art form in the future.

“I feel like the Arangetram is the beginning to a new journey,” she said. “It’s validation, but it’s also validation of the hard work you’re going to be putting towards in the future as well as the past.”