You are at:Home»Current in Carmel»Carmel Community»Carmel parents on a mission to raise awareness after son’s sudden suicide shocks community 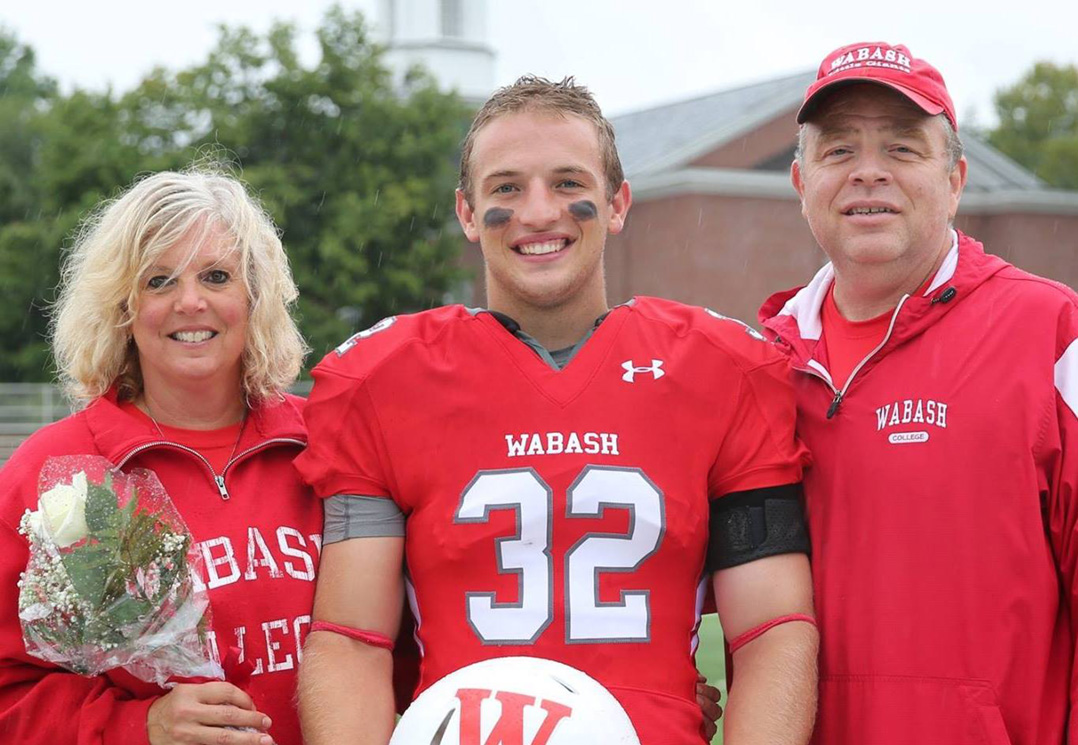 Evan Hansen will always be fondly remembered as the consummate teammate and friend.

“Evan was always helping somebody up,” said Dino Merlina, who coached Hansen on Our Lady of Mount Carmel and Guerin Catholic High School football teams. “If somebody got hit or knocked down, he was there to pick him up. That’s the true epitome of Evan.”

Inexplicably for his countless teammates, friends and family members, Hansen, 21, didn’t show any signs of being suicidal before taking his own life Sept. 10. Hansen, a Carmel resident in his fourth year starting at linebacker for Wabash College, committed suicide two days after playing the second game of the season on Senior Day.

His father, Chuck Hansen, said he and his wife, Mary, knew their son was seeking professional help for depression but there was no indication he was suicidal.

“It just seemed so out of blue for everyone,” Chuck said.

Chuck said there were many people he could have turned to for help since he was captain of the Wabash team, a member of Beta Theta Pi fraternity, had numerous friends and two brothers, Carl and Jack.

Following his death, Boston University requested, and the Hansens agreed, to allow doctors to test his brain for chronic traumatic encephalopathy (CTE), a neurodegenerative disease found in people with head injuries. It might be months before results are known.

“He had one bad concussion in high school, but this was his 14th year of playing football,” Chuck said. “He played varsity as a high school freshman and played both ways (linebacker-running back). He’s been in the middle of everything, but we don’t know and we don’t want to scare people about CTE.”

Chuck said what is important is that young people shouldn’t listen to the bad thoughts in their heads.

“There are people that want to help you,” Chuck said.

There were hundreds in his son’s case. At the Sept. 14 funeral, Our Lady of Mount Carmel Catholic Church’s 1,300 seats were full and the lobby filled with extra seats.

During his funeral sermon, Rev. Rich Doerr said the tremendous outpouring of support was fueled by the love so many had for Hansen and his family.

“In my 25 years of priesthood, I have experienced nothing like it,” he said.

Doerr knew Hansen not only from church but from his work this past summer as a Spanish translator at the church’s Merciful H.E.L.P. Center, serving the underprivileged of Hamilton County. Hansen, a Spanish major, wanted to become a nurse working in an underprivileged area, his father said.

“The problem with young adults is they don’t know their whole life is ahead of them,” said Chuck, who, along with his wife, wants to make it their mission to help prevent this from happening to other families. “It helps with our personal loss that maybe there are families in the future that don’t have to go through this.”

They created an Evan Hansen Tribute page on Facebook, which is serving as a forum to encourage others to seek help.

“People need to talk about (suicide) in the open,” Chuck said.

Since he was always helping others, Chuck said it might have been tough for his son to reach out.

“One of the best things football players are good at is covering up or playing through pain,” Chuck said. “I think that is what he was doing. He was able to put a mask on everything he was feeling.”

For those who Hansen touched, there is no hiding the pain and sorrow. The Wabash defense started the game Sept. 15 at Kenyon College with 10 players on the field to signify the unit’s lost leader. At Guerin, players honored Hansen by standing at the 32-yard-line, Hansen’s number, during the national anthem to honor him the day of the funeral. Guerin players will wear an EH sticker for the rest of the season.

“Evan was a gentle soul and a servant leader that put others before himself,” Guerin athletic director Matt Lane said. “He was intelligent and quick-witted. He and I would go back and forth with one-liners to crack a smile. Evan had a contagious smile and joy about him. That is one reason we are still all so shocked and heartbroken.”

“Even when things went wrong, he would say ‘Coach, we got this, and of course we all believed him,” Lane said. “He was fast, strong and smart, but more than anything he was easy to love.”

“But Evan was in his element around kids,” Merlina said. “The way he was with kids was amazing and the way he respected parents and adults was amazing. The way he helped others, he already was an angel on earth. God took him because he needed to do the exact same thing but five-fold in heaven.”

Joe Lazzara’s son, Max, was one of Hansen’s closest friends. Hansen worked at Lazzara’s Joe’s Butcher’s Shop in Carmel on and off for five years.

“He was always there for our family and for our Joe’s Butcher Shop family,” Lazzara said. “What an outstanding, loving, caring human being he was. Just that Evan smile would brighten your entire day.”