You are at:Home»Current in Carmel»Carmel Community»‘Remembering Dale Graham’ set for Sept. 27 at Carmel High School

In the Carmel High School auditorium that bears his name, the legacy of Dale E. Graham will be celebrated.

Graham, who died in 2007 at age 81, was a CHS teacher, coach, athletic director and principal.

Remembering Dale Graham is set for 7 p.m. Sept. 27. The event will serve as a fundraiser for the Carmel Clay Historical Society and Carmel Education Foundation. 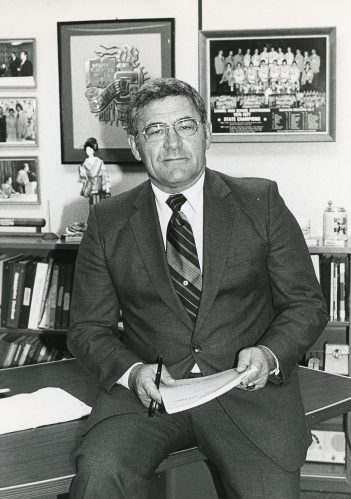 “It’s homecoming week, so we’re hoping people might come into town for the game and they might want to join us,” CCHS interim Executive Director Debbie Gangstad said.

There will be three panels from different eras to talk about Graham, along with family photographs and videos.

“We have pictures from when Dale was a baby and a little kid,” Gangstad said. “We have pictures of him in college and the Army Air Corps. Then we have people who will tell their personal memories.”

Many former coaches, teachers and students are slated to reminisce about Graham.

The event will benefit a grant in Graham’s name for a social studies teacher.

“He was a social studies teacher before he was a principal,” Gangstad said.

He retired as principal in 1989 after 25 years in that position.

“That’s quite a feat right there,” she said. “He was one of the toughest disciplinarians I knew but well-loved.”

Lee Lonzo, one of the panelists, was hired by Graham as a social studies teacher in 1973.

“Then he made me the tennis coach and put me in charge of student government,” said Lonzo, who eventually retired as the school’s athletic director in 2007. “When you consider his longevity of 25 years, it’s pretty darn universal that they loved the man.”

Tickets are $10 for CCHS members and students and $15 for general public. For more, carmelclayhistory.org.