When Christine Ellis arrived at Butler University as a freshman from Clarendon Hills, Ill., she was looking for a club to get involved with that directly impacted others.

Somebody recommended she attend a Best Buddies call-out meeting. Best Buddies promotes friendships with those who have intellectual and development disabilities and those without. 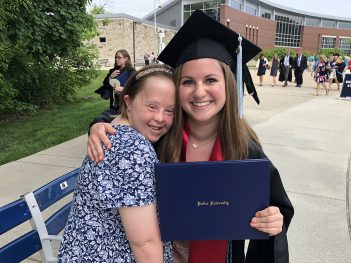 “I fell in love instantly being able to talk with people that have disabilities and form relationships with them,” Ellis said.

Ellis, a 2018 Butler graduate who is in her first year teaching freshman language arts at Carmel High School, has been nominated as Best Buddies Indiana Champion of the Year for her program contributions.

Ellis, who lives in Carmel, is competing with nine other Indianapolis-area professionals in Best Buddies International fundraising. The competition begins Sept. 13. It will culminate with a gala Nov. 10 at the Indiana Roof Ballroom in Indianapolis, where the Champion of the Year will be named.

All have buddies, those with disabilities, as a campaign manager. Ellis’ campaign manager is Kylene Webber, a Carmel resident and 2000 CHS graduate, whom Ellis met when she joined Butler’s organization.

“We’ve become really good friends in the past four years in the Butler chapter,” Ellis said. “There was no other person I would have chosen as my partner (for Champion of the Year) than Kylene.”

In 2017, Webber and her partner, Emily Decker of Carmel, were named the Best Buddies Indiana Champion of the Year.

Ellis and Webber are seeking sponsors and donations. One of Ellis’ fundraisers is set from 1 to 3 p.m. Sept.  15 at Kendra Scott jewelry store at the Keystone Fashion Mall. Twenty percent of sales will be donated to her cause.

Ellis was nominated for her work in growing the Butler program. She was vice president her junior year and president as a senior.

“When I first started, only 20 people, Butler students and buddies, would come to the program,” she said. “I had a goal of growing it to more than 100 members. My senior year we had 105 members, so that was really exciting to me.”

Ellis serves as one of Best Buddies club sponsors for CHS.

“I hope to do the same thing I did at the Butler chapter, strengthen and grow the chapter along the way,” she said.